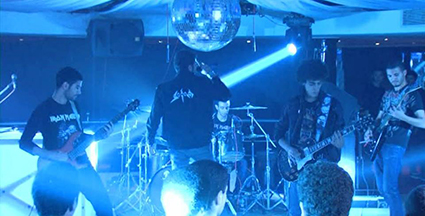 EXCIMER, from Alexandria, Egypt, was officially formed in June 2013 but the actual idea for the band had started much earlier in 2010 when Ramii Muhammed (guitar) and Amr Hossam (vocals) started jamming together.

They were soon joined by Ahmed Mostafa (drums) and Ahmed Samir (bass). It didn’t take long to complete the line up with Rocky on lead guitar. Heavily influenced by NWOBHM, early Thrash bands like METALLICA, ARTILLERY, SODOM, TESTAMENT, VIO-LENCE and fuelled by an unstable political situation, EXCIMER started writing material for their first EP, released in 2013, entitled “Serial Killer”.

Around this time they played their first gig at the Montreal Club Azur in Alexandria. They played a couple more gigs and changed bassists with Hossam Mohammed joining up before settling down in their own home studio in 2014 to record “Thrash From Fire” which they then self released as digital only.

It was this album that attracted the attention of small German label Witches Brew who immediately got in touch with the guys to do an official CD release of Thrash From Fire with some bonus material. The band agreed and the album was officially released in March 2015!