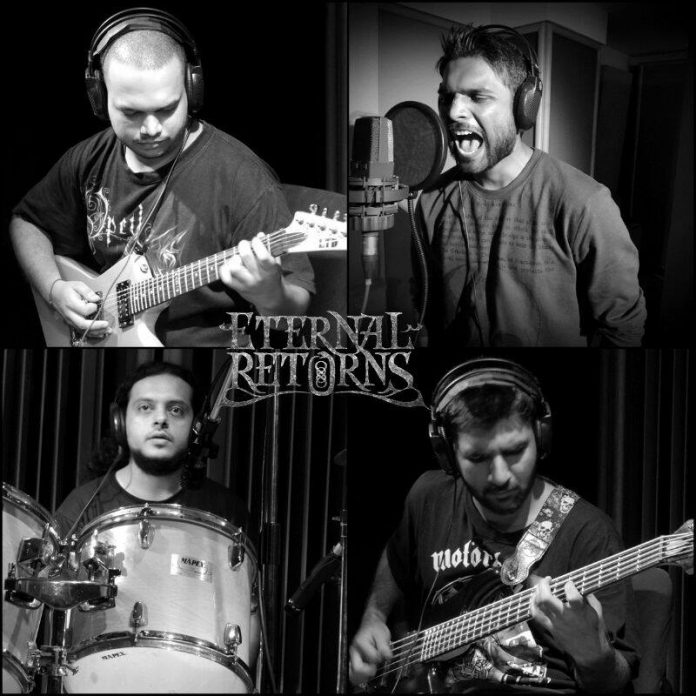 Any band who namechecks Iron Maiden and Megdeth are ok by us, but Eternal Returns are all about Michael Jackson too

Formed around 2009, this is a four-piece metal band from Thane in India. Eternal Returns comprises drummer Pawan Sharma, bassist Harsh Makwana and vocalist Narendra Patel. The Guitarist has recently quit and the position is currently vacant.

The name is derived from an inherent concept of Indian philosophy which firmly believes that the universe has been recurring and will continue to do so, they say: “The phrase Eternal Returns describes our roots, existence, lyrics and, most importantly, the prodigious factor of them all — music. We find ourselves on the pathway to discovering a destructive yet an accessible style of modern metal.

“We once witnessed the bands Zygnema and Infernal Wrath at a gig in 2010 in Mumbai. We were blown away by their performances, and the idea to create music of our own struck. Forming the band was the greatest moment of our lives.

“We relived that excitement eight months ago while releasing their first single Garoul. The track found appreciation overseas — it has been aired on FM radio stations in the Netherlands, Canada and UK. It was also added to a worldwide rock radio heavy metal directory. “Since then, it has been a series of a-ha moments, chief being winning a battle-of-the-bands competition in Mumbai.” We came out with their second single, an anti-authoritarian song called Corporate Bastards a month back.

Our brand of music: Our music is largely groove and thrash metal although we are still on the path to discovering a sub-genre they can call their own. Their lyrical style revolves around the endless cycle of birth, life, death and the myths from which one seeks liberation.

“On our way forward: The band is now working on a new music, as they plan to create an EP and a full-length album on Indian mythology.”