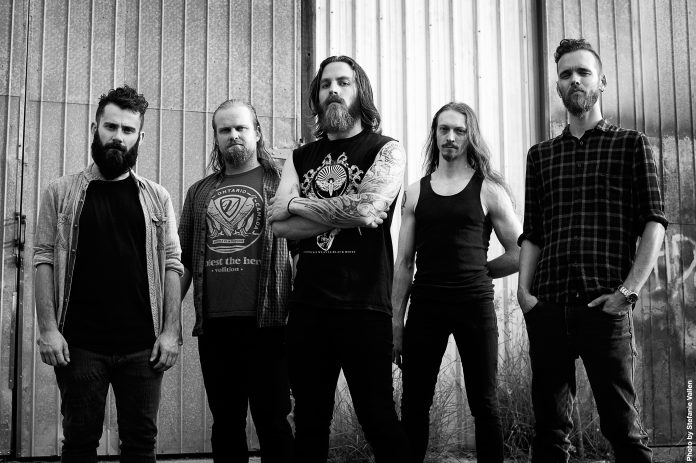 Their new album’s out today

Named after the prized possession of Rome’s infamous despot, CALIGULA’S HORSE is a progressive alternative rock band from Brisbane, Australia.

Channeling the raw honesty of rock and the skill of progressive metal into a seamless voice at once energetic, grand and forthright, CALIGULA’S HORSE offers devotees of all strains of powerful and progressive music something unique.
Formed by Sam Vallen and Jim Grey in early 2011, CALIGULA’S HORSE released their debut album “Moments from Ephemeral City” in April of the same year. “Moments” is a colourful and dynamic foray into modern progressive music, at once vital, eclectic, and memorable. It was followed in 2013 by “The Tide, the Thief & River’s End”, a dark, powerful narrative concept album about isolation, exodus, and the human spirit overcoming insurmountable odds. It received international acclaim in the progressive music sphere, lauded by rock and metal fans alike.

The release of “River’s End” saw the group undertake an intense touring regime, including dates with the likes of OPETH, MASTODON, PROTEST THE HERO, THE OCEAN, FIREWIND, TWELVE FOOT NINJA, NE OBLIVISCARIS, and hundreds more. But for CALIGULA’S HORSE this is only the beginning. After joining the roster of THE AGENCY GROUP in North America, AMF Publishing in the UK, and signing with the prestigious German record label INSIDE OUT, the band’s sights are firmly set on the rest of the world.
2015 will see CALIGULA’S HORSE release their third record “Bloom”, their most vivid, vibrant, and emotional work to date, melding the group’s penchant for dramatic colour with the high-energy musical drive the band has become known for across the world. “’Bloom’ is very special to all of us – it’s an album full of colour and life, vibrancy and energy, but one that breathes in and out with a natural ebb and flow,” says lead vocalist Jim Grey. “It’s exactly what we hoped to achieve with Caligula’s Horse. To us, this album has a life of its own.”It is the perfect mission statement for an act blurring the line between power and reflection; a musical assertion with depth enough for the most dedicated of prog fans, and with fire enough to bring audiences in venues across the world to fury and their voices to unison.