Socially aware Canadian thrashers with their own comic book

BornBroken are a Montreal-based metal band uniting the world through their unique take on explosive death/thrashcore. The band is three parts vocals with Pepe Waitforit Poliquin as the lead singer and Mike Decker and Simon Savard performing double-duty on guitar and vocals, one part low-end bass crafted by Tommy Vaillancourt, and one hundred percent integrity.

BornBroken is the sound of the beaten and the fallen overcoming their outlook of a blackened tomorrow through the medium of aggressive, galloping metal. Lyrically, the focus remains on taking sorrow and anger and rising up from the ashes to rebuild and heal a new world from one that’s crumbling down around us now. Lyrics have had a very personal connection for the band since their beginnings in 2008. Much of the band cut their teeth playing in local groups like Endast, Burn Unit, Dilute the Poison and Mort au Combat.

Contrary to their raw, aggressive music they are incredibly passionate about truth, integrity, perseverance, loyalty, and faith in humanity’s struggle for equality, which is all exposed on their debut album ‘The Healing Powers Of Hate’ released in 2013. The album was nominated for Metal Album of The Year at the 2014 GAMIQ Awards (Gala Alternatif de la Musique Indépendante du Québec), fan voted as Album of The Week (June 10th, 2013) on Revolver Magazine, along with debuting #8 on Canadian College Loud Charts, plus was named one of the best unsigned Heavy Metal Bands for June 2013 by Drago’s Dungeon on About.com – Heavy Metal. The band is planning a heavy follow up for 2016 and after months of writing and hours spent in the studio, BornBroken has managed to take every emotion they felt, put it to music, build off of past battle scars, and create a record where listeners will feel they are part of the story line. The band continues to create grinding, heavy music inspired by the likes of Hatebreed and Sepultura. Get ready to experience the monumental shift when the broken shall finally rise. 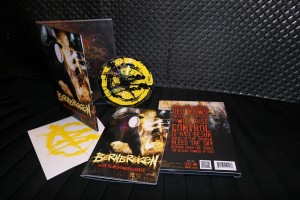 To order their incredibly designed physical copy of ‘The Healing Powers of Hate’ plus comic illustrated booklet  please visit the following link http://bornbroken.bandcamp.com/album/the-healing-powers-of-hate.