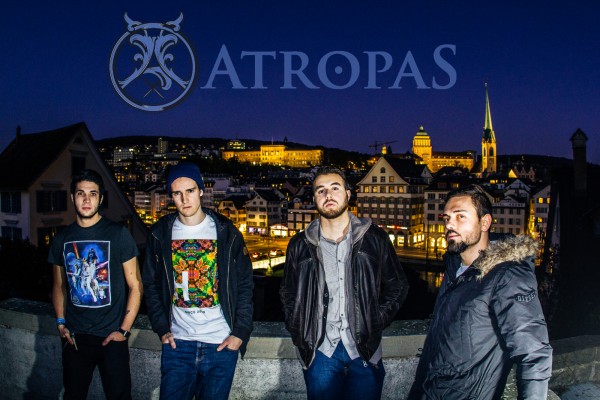 Started in the year of 2011 by founding members and guitarists Mahmoud Kattan and Philipp Tudor, they soon discovered bassist Kevin Steiger who was eager to join them. After having a little trouble finding a drummer, Sandro Chiaramonte, a close friend of Mahmoud, finally completed the four-man-band, and Atropas was born.

The band name itself refers to one of the Moirais in Greek mythology (a moira being one of the goddesses of destiny; originally, her name is Atropos) and was actually brought up by one of the first drummers the band had. A consensus was quickly reached concerning that name, the dark nature of the reference being something everyone found quite agreeable.

After changing the last “o “for an “a” due to reasons of pronunciation and originality, Atropas was good to go. From early on influenced by protagonists of many metal genres (such as August Burns Red, Killswitch Engage, Trivium, Machine Head,  Pantera, Metallica, just to name a few of very many), they proceeded to play concerts and getting to make their name known.

Since then, they shared the stage with national and international bands such as Nile, Skindred, Mycelia, Dreamshade and many more. Rather than being perceived as the typical metal band with the typical metal looks and image, Atropas wants to be known as four regular guys who happen to play metal. Their lyrics, being in accordance with that, center on things like their own observations of the world, personal struggles and conflicts in general. Especially Mahmoud, singer/guitarist and main songwriter of the band, wants people to come up with interpretations for their songs themselves.

Currently, the band has their new full length record (title is to be announced soon) coming up and is signed under the Italian label WormHoleDeath, which has helped them getting to a new level. Atropas wants to reach bigger things and have an impact on the heavy music scene; Ambitious and aspiring, they’re willing to go great lengths for their goals.

Worm stated: “ATROPAS  have proven to be one of the most hard working and focused bands that I have ever met during my life. The result of this cooperation with them and MathLab is absolutely unbelievable. This album sounds huge, tuneful, brutal and catchy at the same time but the main point is their rage. The rage that will explode with violence, the drive caused by urgency, the suffering through the melody, the brutality of of reality. This is ATROPAS and will blow you all away.”