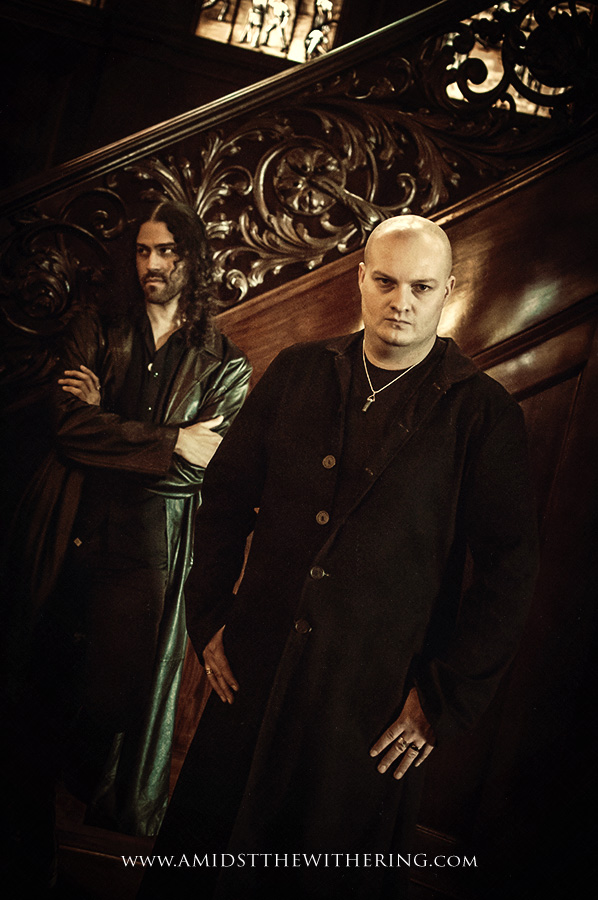 Atlanta black metal that goes where Norse gods are afraid

There is a land where even the grim Norse gods dare not tread (nor anyone of northern heritage for that matter). It is a forsaken wasteland where the summer sun is merciless, and on a particularly humid day, swimming rather than walking becomes the primary mode of locomotion. Here in the mind-numbing doldrums of suburbia, south of Atlanta, Serge Farinas, John Hembree, Cliff Widener and Jason Cartee (rogues of the first order, and musicians of questionable order) decided the only thing better than one musician producing a terrible sound was a group of them doing it together. The brigands settled into this core group in the early 2000’s after much upheaval and rotations of itinerant musicians. The group’s “brilliant idea” was to create a sound incorporating elements from black and doom metal, and also experiment with rhythm and orchestration. About this time they settled on “Amidst the Withering” as their name because creativity was in short supply.
To understand how ridiculous and vain their efforts were, you have to put things in context. Here was a bunch of sweaty metal and goth kids trying to do dark-symphonic metal in the heart of Dixieland, where the top 40 radio has played the same Lynyrd Skynyrd songs for the past 40 years and the past-times of choice include Jim Beam, shooting TVs, and tire bonfires. The line-up at this time was John on drums (later vocals), Serge on guitars (who later tried and failed hard at vocals), Cliff on keyboards, and Jason on bass. Many songs were written and few of them could be described as listenable, yet the band began recording an album in 2004.
However and alas, the band didn’t survive the process. Due to stress, poverty, relationship problems, diverging life paths, and Serge generally being an asshole (stupidity and depression suck, kids. He got better though…) the band fell apart. Serge released the album “Ars Moriendi” in 2005 on the internet and acclaim shortly followed from a couple of people in Norway and maybe one Kenyan. The members went their separate ways to become (dis) functional members of society. Serge became involved with other music projects, but eventually after a long gap, came to work with John again in the late 2000’s (on a completely different project).
Serge and John began working once more on Amidst the Withering around 2010 or 2011. They decided to completely revamp the old material, while also setting aside new material for a follow-up. The re-titled release “The Dying of the Light” (2015) represents many hours of labor and love (and hatred?). Although it has changed much, the music still contains within it the spirit of Jason and Cliff. We are forever indebted for their contributions and for making times a little less miserable.