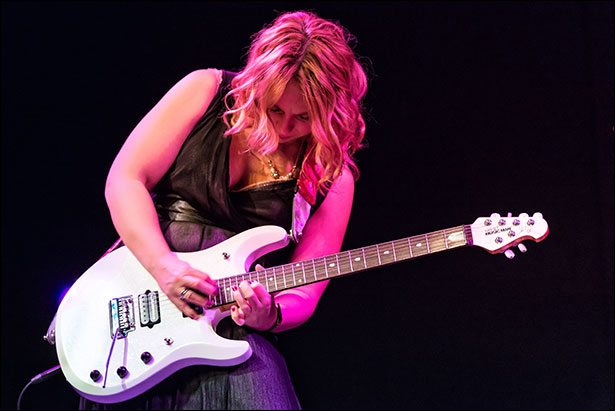 The Yorkshire blueswoman under the microscope

The Blues came calling first, but rock and roll was always waiting around the corner. When Chantel was eight years old, she was the youngest person in the UK to pass a Rock school exam.  At 12, she was jamming in her native Bradford and evolving into a gifted musician.

A female guitar prodigy, at fourteen Chantel was told by major labels that she had a “great voice, but girls don’t play guitar like that!”  Wisely ignoring the comments, she enrolled at the Leeds College of Music and became the first student in the college’s history, to achieve a 100% pass mark, with 18 distinctions.  Chantel left with a First Class Honours degree in Popular Music and a coveted prize, for outstanding musicianship.

In previous years, Chantel stepped out in the pro-musician world and her stunning live performances demonstrated that she had the ability to perform rock blues for the new age, played by a musician born with an effortless virtuosity.  Since then, she has built a loyal and growing fan base who follow her every move.

When Chantel released her 2011 debut album, Like No Other, one critic said:“Chantel McGregor deserves to be held up as a messiah of blues-rock and given her own mountain. She doesn’t strum or pick her guitar but almost bends and distorts it, as if she’s channelling the ghost of Hendrix through her fingers.”

When asked about performing on stage, Chantel said; “Playing live to great audiences is one of the most wonderful feelings, I feel lucky to be able to do something that I love, see the world and bring happiness to others through my music.”

If you measure an artist’s prospects by the company they keep, then Chantel has been moving in the right direction. Early in her career, Chantel was invited to perform withJoe Bonamassa, on two of his UK tours.

In 2011, Chantel’s debut album, Like No Other, was produced by Livingstone Brown, whose production credits include Ed Sheeran, Robin Trower, Tina Turner, and Shakira. The end result was a beautifully crafted debut album that showcased Chantel’s versatility and talent as a singer-songwriter.

On song writing, Chantel says, “I really enjoy creating my own songs, it’s a fantastic way of being able to say what I wouldn’t normally say in everyday life and getting my feelings out, writing for me is very therapeutic”

Chantel was recently nominated again in the Guitarist of the Year category in 2015‘s British Blues Awards.

In 2014 Chantel began writing and recording her second album Lose Control,this being due for release in October 2015.

Previous article
Face The Fear
Next article
States Of Live