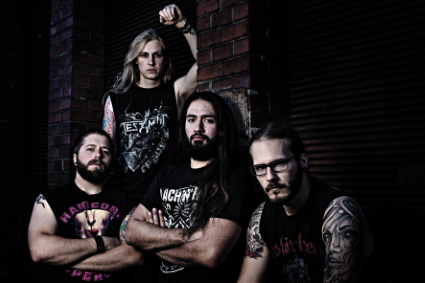 From the beginning they impressed audiences with their trademark interplay between Simon Schwarzer’s earthy voice and Patrick Prochiner’s clean vocal parts, creating an ingenious antipole. Many of Fateful Finality’s songs, which in artistic terms could be described as a confident blend of the sonic worlds of acts such as Machine Head, Exodus, Lamb Of God, Testament and Trivium, live off this conscious friction.

Following the release of their dirty, raw, compelling debut album ‘King Of Torture’, in 2011, Fateful Finality went on to be crowned winners of the Wacken Open Air Metal Battle Germany 2012. Having spent the best part of a year touring around Germany following their WOA win, Fateful Finality began writing and working on what was to become ‘Battery’.

The band went through a concentrated phase of two selective pre-production stages before plans for the recording of ‘Battery’ were finalised. Following the first pre-production in their own rehearsal room, Fateful Finality met up with producer Eike Freese at Hamburg’s Chameleon Studios, where they recorded 15 songs live.

The 15 compositions were then put to the acid test by the musicians and their sound engineer, who between them whittled the list down to the eleven vital, surprisingly diverse songs that ‘Battery’ comprises. Fateful Finality went on to record with the support of Eike Freese in Hamburg and with Alexander Dietz (Heaven Shall Burn) at the Chemical Burn Studios in Bad Kösen, Saxony, before going back to the Chameleon Studios, where ‘Battery’ was mixed.
FATEFUL FINALITY – Live