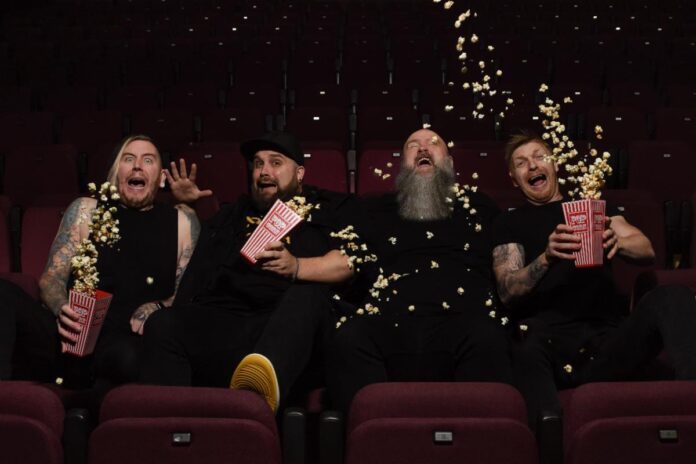 High octane, pop punk powerhouses PUNK ROCK FACTORY are the kings of turning any song into a pop punk masterpiece. The boisterous four piece take all your favourite tracks and make them sound like you never quite imagined they could! No-one is immune from the PRF treatment – these four lads from South Wales have adapted everything from Disney classics, assorted rock & pop hits and TV themes from across the decades.

Since their debut self-release in 2019, PUNK ROCK FACTORY have been quietly gaining a colossal online fan base. The cultural sensations have already racked up over 26 million streams on Spotify and 5 million likes on TikTok, with 245,000 followers on Instagram, and over 11 million views on YouTube. No mean feat for a band you’ve never heard of (‘til now)!

In 2023, the guys turn their attention to musicals, with the forthcoming release of new album It’s Just A Stage We’re Going Through, due to land on 31st March.

The band inform us;

“Our new album is a punk rock homage to stage and screen and in our opinion, our best work to date. We found out before that Disney has a devoted cult following and fans of musicals are no different. We knew we had to push the boat out and step up our game. Because who doesn’t love a musical?”

“The album’s first single ‘Rewrite The Stars’ (from the movie ‘The Greatest Showman’) also inspired the album’s cover art. In the music video for it, we accelerated the aging process with some awesome special effects makeup and also brought in our good friend Sean Smith of The Blackout to play a cinema usher! The video depicts that no matter how old we get, we’ll still be best mates pissing around… And Sean Smith will always have questionable hair!”

Watch the official video for ‘Rewrite The Stars’ here or by clicking the thumbnail below. The track is available on all streaming platforms now and as an instant grat with album pre-orders.

The group rehearse, write, and record everything themselves in their own purpose-built studio in Wales, affectionately known as The Sausage Factory.  They regularly include a wide range of special guests in their music, which have included the likes of actress/singer Jessica Darrow (Disney’s Encanto), Jaret Reddick (Bowling For Soup), and Spencer Charnas (Ice Nine Kills) amongst others – this time welcoming Simple Plan’s Jeff Stinco for a face-melting solo on ‘Waving Through A Window’ (from ‘Dear Evan Hansen’).

Pre-order the album now at: https://punkrockfactory.com/stagepresave.

PUNK ROCK FACTORY played their first ever live show at the UK’s Bloodstock Festival in 2021 and followed up with a sold out UK tour and slots at Download and Slam Dunk in 2022.

The band are steamrolling into 2023, preparing to tackle their second ever UK tour in Feb/Mar 2023.  Punk Rock Factory’s Excellent Adventure is well on track to be sold out once again months in advance (with extra shows already added)!  Today, the group are thrilled to announce their It’s Just A Stage We’re Going Through tour, in support of their new album in Oct/Nov 2023. Special guests at the new dates are Adam & The Metal Hawks, plus a DJ set from Matt Stocks.

Younger fans will be delighted that the majority of the new Oct/Nov dates are aged 8+ (under 14s must be accompanied, under 16s in Brighton), with just Bristol and Norwich shows aged 14+.

Don’t miss the rip-roaring fun of the live show! Here are all the UK headline dates to catch PUNK ROCK FACTORY at present:

WITH SAY IT ANYWAY AND A DJ SET FROM SEAN SMITH (THE BLACKOUT):

WITH CROWN THE KING:

NEW SHOWS WITH ADAM & THE METAL HAWKS AND A DJ SET FROM MATT STOCKS:

Tickets for the new tour go on sale Friday, 16th December, at 10am GMT. To buy tickets, and for a full list of all performances, including festivals already confirmed for 2023, please visit www.punkrockfactory.com.

Determined to get as many miles under their belt as possible, the road dogs have just wrapped up the German leg of Punk Rock Factory’s Excellent Adventure tour. You might have also caught them on TV recently, appearing on ITV2’s ‘Don’t Hate The Playaz’ show, performing some classic hip hop/grime songs in a pop punk style for the celebrity panel!