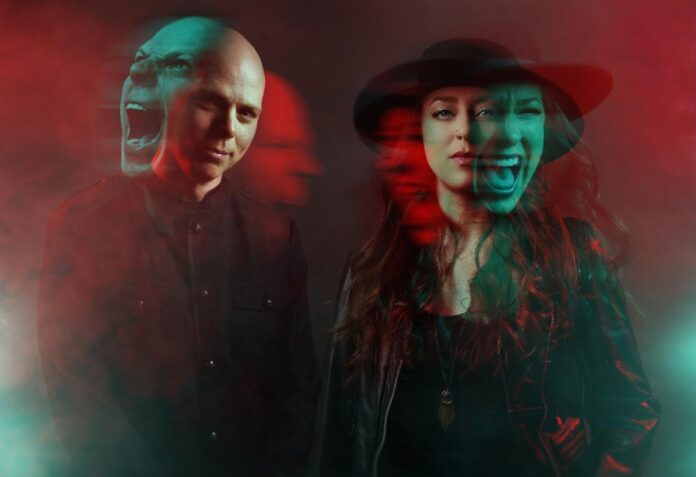 THE L.I.F.E. PROJECT, the musical meeting of minds between Grammy-nominated STONE SOUR guitarist, Josh Rand and PARALANDRA vocalist/guitarist Casandra Carson, have today released their 4-track EP, titled ‘Big F.O.U.R.,’ via Bloodblast.
The collection features four cover versions; one each from heavy music’s pioneering icons; METALLICA, SLAYER, MEGADETH and ANTHRAX. The duo’s take on Metallica’s ‘One’ is revealed today, in tandem with the full EP which you can stream or purchase here.
With regard to their interpretation of ‘One’, Josh Rand comments: “The intro to ‘One’ was the very first piece of music I learned on a friend’s guitar many years ago. And the fact that the song has really never been covered… it just made sense to me for us to cover this epic track.”
Similarly, vocalist Casandra Carson tells us: “I love that the melodies are haunting, and the lyrics are so dark. I was stoked to take a stab at it and paint a picture of how the songs feels to me.”
THE L.I.F.E. PROJECT have also today announced their debut live show, which is set to happen at The Riff in Springfield, MO on April 30th. Tickets are on sale now, grab yours here. You can also pick up a new ‘Big F.O.U.R’ t-shirt design, along with signed copies of the duo’s debut EP on both CD and cassette format at the band’s online store.
Discussing the release earlier this month, Josh Rand told us:
“Recording a Big F.O.U.R. cover EP is something that I have wanted to do for a very, very long time, and last Fall I decided to finally do it with THE L.I.F.E. PROJECT. Without these four bands (METALLICA, MEGADETH, ANTHRAX, and SLAYER) my musical career wouldn’t be where it is today. In some ways you could say this project is paying homage to them or, how I see it, a return to where it all started in my parents house as a teenager trying to learn just a piece of the music. Each of the four songs that I picked were pivotal in my development as a musician. Whether it was learning the intro to ‘One’ on guitar, drums on ‘Symphony [Of Destruction]’ or bass lines in ‘Caught in A Mosh’. This EP was a true love and passion project for myself. I feel I captured the vibe and the spirit of the original but with THE L.I.F.E. PROJECT sound. Hopefully you hear it too!”

Stylistically, THE L.I.F.E. PROJECT is a fluid combination of classic metal sensibility and Rand’s penchant for pushing the boundaries of contemporary heavy. Released last summer, THE L.I.F.E. PROJECT‘s debut self-titled EP can be streamed here, with physical CDs and vinyl options available exclusively through the band’s webstore or via the Nuclear Blast store.
Josh and Casandra’s debut single, ‘The Nothingness‘ was featured on several major playlists across streaming platforms including Rock Hard on Spotify, Breaking Metal on Apple Music, Break Through Rock on Amazon and Metal Radar on Deezer. ‘The Nothingness’ was also included on SiriusXM Octane’s Test Drive show on release. Expect more from THE L.I.F.E. PROJECT in due course.