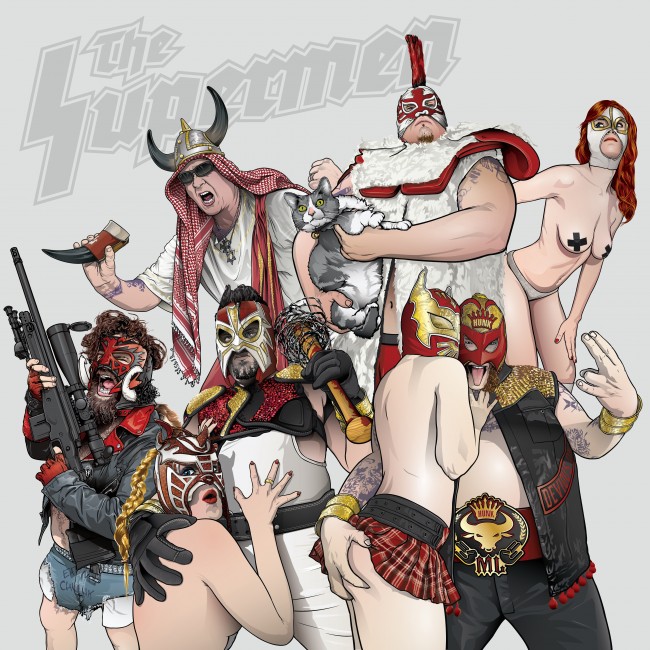 St. Louis’s answer to perversion and partying, bar none! With the kind of live show that Tesco Vee and Gwar can put mixed in with the humor of Dwarves, these guys are everything that PC crusader rails against, let the excerpt from their press release speak for itself!

The band say their  “raucous, speed-fueled rock ‘n’ roll has lead the charge against the pussification of modern youth. Whether it’s songs like “Blood, Honor, & Pussy”, about all things good in life; “Girls Like Sperm“, which extols the health benefits of a steady diet of semen therapy; or “I’ll Fuck You ‘till You Love Me Faggot“, a song with lyrics consisting entirely of quotes taken from their hero, Mike Tyson—The Supermen will leave you begging for more. ”

Unite your friends and enemies alike; triumphantly march together to return rock ‘n’ roll to its true glory. Let The Supermen fill that dark void in your life with their unstoppable, unrivaled, and unforgiving new record: Back with a Gang Bang!”

Back With A Gang Bang is now in stock at both Shop Self Destructo and Shop Turbojugend on both black vinyl and “flesh” colored vinyl (as shown in pictures above).  If you’re curious on what songs with titles like “Fitness Model Motherfucker” “I’ll Fuck You Till You Love Me, Faggot” and “Champion’s Burden” sound like, then we invite to stream the gospel of perversion that is Back With A Gang Bang at the bandcamp page.