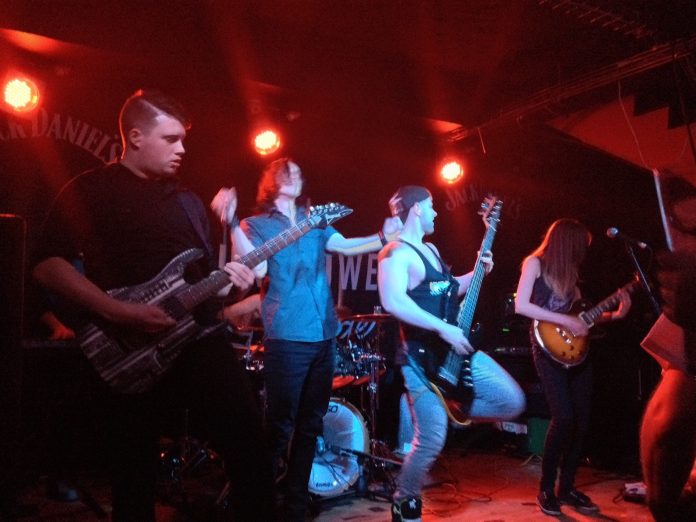 One band celebrate the end of the career, one anticipates the start of theirs.

48 Hours are making their second visit to the second city in a couple of months. Their impressive show at The Asylum was clearly no fluke, because they are at it again here. Catchy rock with hooks and a modern twist is never a bad thing and they do it very, very well. “Liars” is thumping angular stuff, with more meaty riffs than they first appear. Adam Jerome on vocals and guitar meshes to great affect with bass man Gary Broughton to give tracks like “Nothing Left” a real harmonic quality.

The breakneck “Hollow” – the three pieces first single – is a song of real substance, while “Scars” sees drummer Matt Savini thump his kit for all he’s worth. They end with a brand new tune called “Expectations” and its title allows for some daydreaming as to what we can expect from the band. The suspicion is clear: 48 Hours are but a couple of well placed festival slots from breaking through.

In their previous guise as eSOTerica, the band now called ESO toured with Marilyn Manson and headlined Shepherds Bush Empire, before calling it quits. Then they came back with a new name for another go. Like a their first single on their comeback said: “There is nothing left to lose….”

Now – for now at least- it’s over again. This run of shows (tonight is the second) follow a reunion for a charity gig in January, but everyone seems keen to enjoy themselves here with a little nostalgia.

It’s a confident six piece that crams itself onto the tiny stage at The Sunflower Lounge. And there are a couple of things you immediately notice: first the band is heavier than you thought they’d be. Second, singer barefoot Tobias is a hypnotic focal point, apparently in a trance at any given moment. Third, their bass player is a big fella who’s pint ain’t getting spilt any time soon. More importantly though, musically this is a performance of real passion. The use of keyboards is clever, and on occasion it reminds of early Dream Theater covering A Perfect Circle.

“Scream” swaggers about like it owns the place on a mighty groove and is a veritable alt. Rock anthem, it suits them. In truth. ESO are a band that very obviously harbors loftier ambitions than a freezing cold basement beneath a city centre bar, these are songs with one eye on the horizon, and the other on a stadium somewhere. Quite simply they sound enormous.

Amongst all these epics, “Birds In A Hurricane” manages to blow away (sorry!) even its competition. It seems to be a real neat summation of all ESO try to do. It’s got a riff, a hook, a crunch and a groove, but then so do thousands of other bands. What it also possesses a soaring feel that sets this apart.

“You’ll Never Know” is perhaps the most visceral track on show here, and there’s real aggression on the angry “Don’t Rely On Anyone” which concludes the set.

The upstairs drinkers don’t seem to care, but down here where it really mattered, we know that something pretty special occurred. And if this is the end for ESO, then at least they did it on a high. You wouldn’t bet against the comeback again, though. ESO are too good to die out.