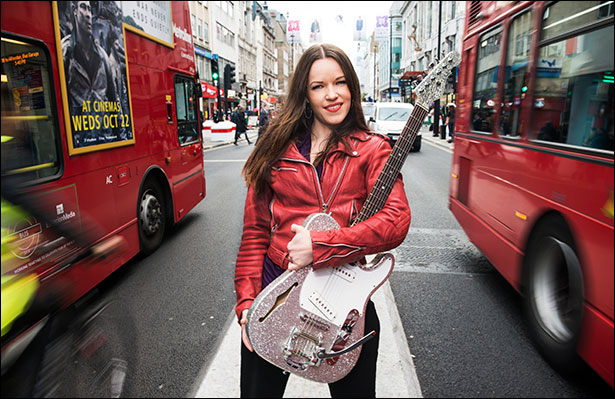 With her new live album out next month, Finnish blues guitarist Erja Lyytinen, gives us the lowdown

Tuohi Records is pleased to announce the UK release of Live In London, the highly anticipated new album from Finnish blues guitarist and singer-songwriter, Erja Lyytinen.

The album will be released on CD and digital download in the UK on Monday 8th June 2015. The CD edition will also include a bonus DVD disc featuring the 100 Club concert filmed in its entirety.

With a colourful history that goes back to 1942, the 100 Club is considered the oldest independent music venue in the world. During that time, a who’s who of blues and rock’n’roll legends including Muddy Waters, B.B. King, The Who and The Clash have entertained audiences there. It’s also played host to “secret shows” by the Rolling Stones, Paul McCartney, Metallica, to name but a few.

For Lyytinen, however, a pair of concerts by American blues legend Son House – recorded at the 100 Club in the summer of 1970 and later released as Delta Blues and Spirituals– stand out above the rest. “He’s one of my big favourites, and when I first heard that recording years back, I didn’t expect I would someday be on the same stage!”

The live album kicks off with an a cappella tribute to another Delta Blues giant, Fred McDowell, then gets things rolling with the help of the band on her own grooving Let It Shine. The next two cuts are by Elmore James and offer listeners a first taste of her 2014 studio release The Sky Is Crying.

A high-spirited and technically brilliant tribute to James, the album earned high honours in Erja’s native Finland (voted Best Album of 2014 by Finland’s YLE Radio Suomi ‘Bluesministeri’) and abroad (selected as one of top three international albums of 2014 by Britain’s Blues Matters magazine).

The live album progresses with an impressive block of original material: The shufflingEverything’s Fine is driven by Inniss and Miettinen’s strong and steady groove, whileHold On Together provides the framework for an all-out guitar duel between Lyytinen and Floreno.

Three more Elmore James titles – including a stunning seven-minute version of The Sky Is Crying – allow Erja to show off the full depth of her slide-playing abilities, but also turn the spotlight on Floreno, who proves that the band is more than just a one-gal show. For her part, Lyytinen stays away from slavishly copying Elmore James, instead offering a respectful but fresh and decidedly female take on his classic material.

Although Erja Lyytinen tours extensively throughout Europe and North America, there are a few places she hasn’t reached yet. The striking sounds and vivid colours of Live in London CD and DVD set will give listeners and viewers the opportunity to experience this unique musical talent up close and personal.