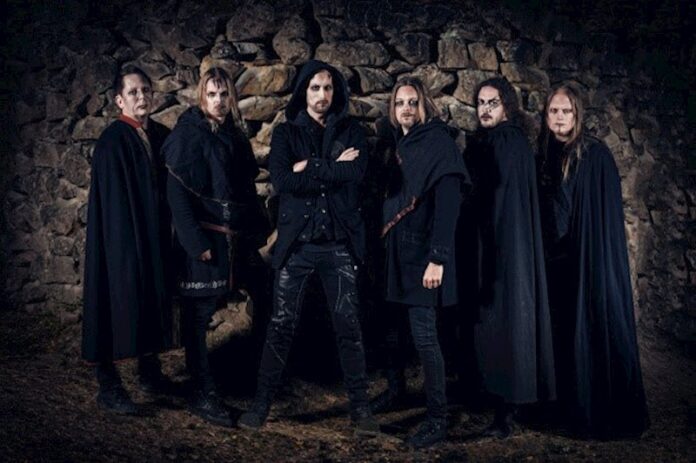 When it comes to defending the core values of timeless power metal and combining them with fresh stylistic variations and exciting stories, Swedish power metallers Bloodbound have always been fighting at the forefront. With nine studio albums in 16 years under their belt, the six-piece has proven their versatility and inventiveness countless times. Following the much acclaimed, latest record Creatures Of The Dark Realm (2021, AFM Records), Bloodbound have announced the release of their upcoming masterpiece, entitled Tales From The North!

“‘Tales From The North’ is very much a concept album about the viking era. About the lives of our ancestors up here in the dark, cold and unfriendly environments of the north,” explains lead guitarist Tomas Olsson and summarizes the content of their eleven songs: “Different legends and myths intertwine during the course of the songs, leading up to the epic battle of 1066, which marks the end of the viking era.” Those who already know the sound of Bloodbound can imagine the metallic force the band employs to evoke this story. Tales From The North will be released on July 7, 2023 via AFM/Soulfood as a 2-CD digipak including a live CD. As a special treat, it will also be released as a strictly limited box set as well as coloured vinyl LPs.

Give ear, as today, the band shared a lyric video for their first album single “Odin’s Prayer”!
“Odin’s Prayer is a real banger of a song,” Fredrik Bergh comments. “It represents the new album well and I think it’s a great first taste of the new record. On Tales From The North we have gone back to the roots of bloodbound a bit and I think the bloodheads will like what they hear!”

Watch the Official Lyric Video for Odin’s Prayer HERE
Bloodbound have not only improved in terms of content, but also musically. Says Olsson: “The songs are more fast-paced and closer to some of our earlier stuff like ‘Moria’ and ‘Nosferatu’, but have more complex arrangements. Compared to the predecessor ‚Creatures Of The Dark Realm’ there are heavier guitars and some deeper sounding keyboards. We have also incorporated some traditional nordic folk music instruments to fit the concept of the album. It`s still pure power metal but we’re trying to take it to the next level.”

Tales From The North was produced by Bloodbound, and was mixed and mastered by Jonas Kjellgren (Amorphis, Overkill, Sabaton) at the Swedish ‘Black Lounge Studios’. The cover artwork was done by Péter Sallai (Hammerfall, Powerwolf & many more).

In support of their upcoming album, Bloodbound has announced an extensive headliner tour and to appear at several festivals such as Karmoygeddon, RockHarz, Masters of Rock, among others. Make sure to catch them live at the following dates this year:

Previous article
PLEASURE IN THE PLAGUE
Next article
REVIEW : SAMTAR –  SHADOW OF THE KINGS CHARADE (2023)