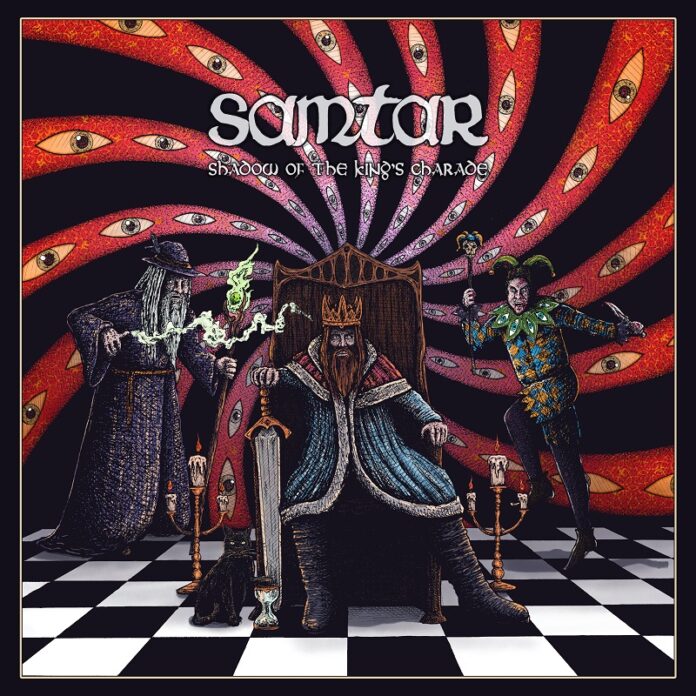 Samtar is a multi-instrumentalist and singer songwriter who grew up on the likes of System of a Down, The Black Dahlia Murder, Opeth, Sonata Arctica, Muse, Jimi Hendrix, Sublime, and Nirvana. He now takes these differing inspirations along with vocal influences from Mike Patton (Mr. Bungle / Faith No More), and Tony Kakko (Sonata Arctica) and produces his own, unique sound.  `Shadow Of The King`s Charade` is the latest album from Samtar, his fifth, and is out this month.

`The Shadow From My Dreams` relays the tale of a pretty brutal relationship breakup and the desolation of the partner left behind, how they are coming to terms and rebuilding their life but recognising that they may never meet somebody who will have the same effect on them. The track opens with some delicately shared keyboard and guitar chords and has a delightfully melodic gentleness about it with some sweet harmonies combined along it`s heart-breaking narrative. A kind of echoey electronic synth beat leads us into `Cool To Me` which has a driving drum beat and guitar riffs aplenty with an intricate solo played about two thirds of the way through. It appears to be about the frustration of seemingly believing that he / she / we / all agree on the same subject but nevertheless continue to argue. The exasperation is almost tangible in the vocal delivery.

`Echoes from Across the Sea` has a reggae vibe with what sounds like horns joining along with a tinkling piano, quite breathy and reassuring vocals, and a brief guitar solo towards the end. It has a positive message advising a friend to let go of something that`s ultimately destroying them and that you`ll be there at their side to support them. We have a number that had a kind of twilight zone feel to it not only musically but lyrically as well with `Existential Horror`. It may have been about an unsettling dream, premonition, or sense of foreboding. The track became a lot rockier midway through before returning and concluding with a much gentler passage with some captivating flute tinges.

`The Man` is fairly short but similarly fairly succinct. A folky contemplative musing with acoustic guitar and hand tapped percussion with the narrator questioning their ability to achieve a happier existence for them and their environment. There was a quite Americana / country touch to `The Fool` initially before it swings to a much more metal outing with a tale of vitriol against somebody who I presume was once in their life, whom they feel, betrayed them.

`You Bleed` has a nigh on concealed intensity and although it was a fairly melodic number with some heavy rock guitar riffs it felt as it could be about to erupt but didn`t. It seemed to touch on an acquaintance`s beliefs which may be creating the issues in their life that they seem to be undergoing. We have a further track in `She Will Have Her Revenge` that alludes to a woman who has upset the storyteller or somebody close to them with her behaviour. A cautionary tale with the hurt being wrung out through the vocals shared.

`River Spirit` bounces along with a fairly melodic sound and lyrics that were pretty much beyond me but may be a metaphor or refer to the spirit or soul suggested the title. A chugging guitar riff leads us through `Wild Boys` which may well refer to those world leaders who are there to govern and guide us but appear to be there for their own benefit and rewards.

`Lost Vision` is definitely a headbanger but with some subtle nuances melded in, to me a number to just sit back and nod your head along to. We have a much more pensive, thoughtful, ruminative submission with `Her Shadow` which conveys the pain and hurt of a relationship breakup where your previous love still feels the desire or need to reappear in your life.

The album concludes with `Town Of Forgotten Souls` a powerful, evocative expansive mediative ballad / anthemic musing on life, love, and our very existence possibly. The vocal delivery portrayed a sense of exasperation or exploration as to the purpose to our existence. Then again that may only be my interpretation.

`Shadow Of The King`s Charade` is a really interesting auditory experience. It has a metal flavour but does veer towards some other musical genres. The lyrics, to me, are fairly thought provoking and can be perceived in a number of ways. Samtar has a deep and rich vocal texture which allows him to deliver these songs in a variety of expressive modulations.

A gratifying aural and spiritual experience awaits those who take time to listen.

Previous article
DUE NORTH
Next article
IN THE MIX