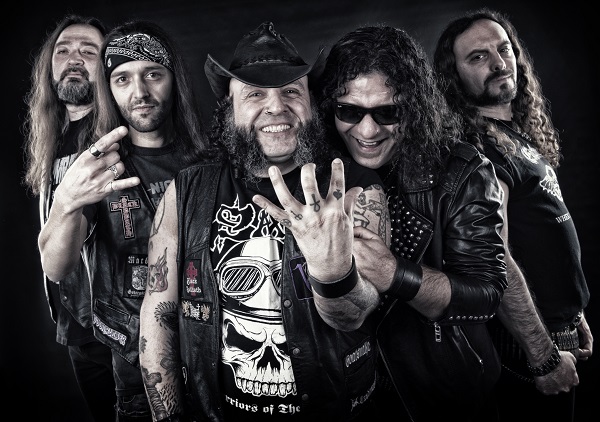 This Italian band have toured with a who’s who of doom. Now their new album is out.

Doomraiser were born having the intention to pay tribute to the music and to the great family of doom, without imposing to themselves to do it in an original way or to invent anything new, but
just to pass, in the best way possible, the feeling the genre has.

The band was formed out of different musical experiences in 2004,and released an excellent demo in 2005. More than 700 copieswere spread, and the constant demand forced the band to have it entirely ready for download on their home page. The response at it was so good that the band was invited to take part on the 2006 Doom Shall Rise IV, as well as playing both editions of the Roman Stoned Hand of Doom (2005/6) and in the 3rd edition of the{S}Hammer Metal Festwith band like Sodom, Belphegor, Sadist. In December, the band decided to record their debut album, and thenbegan shipping it around, looking for a label. In the meantime, a very limited edition vinyl single featuring a different version of The Old Man to the Child was released through Ghost Records.

Amongst other dates, the band appeared at Dutch Doom Day V along with bands such as Reverend Bizarre, The Gates of Slumber and The Prophecy. After the album release, the band have supported bands like Orange Goblin, Witchcraft, Nick Olivieri and the Mondo Generator and Red Sparowes.

In May 2007, the band toured Europe again to support the USA heavy doomster Solace in their“The Black Black” European Tour. The live activities of Doomraiser in all Europe never stop with tour, mini tour and festival appearances. It is time for the new album and the recording sessions started at the end of November 2008, after a new European mini tour in October and November. “Erasing the Remembrance”, the 2nd album, was out on March 13rd 2009 on BloodRock Records (distributed by Black Widow Records). In 2009/2010 the band continued touring in Italy, United Kingdom, Belgium, Holland, Germany, Austria, Switzerland, to support the new release,sharing the stage with bands as Electric Wizard, Shrinebuilder, Toner Low, Ufomammut, Crowbar and more.

In November 2010 Doomraiser released a 7” split with Earthride. The band released their 3rd album “Mountains of Madness” (CD and ltd. edition LP) on May 13rd 2011 via BloodRock Records (distributed by Black
Widow Records). Doomraiser toured all along 2011 and 2012 supporting the new opus and playing with titanic bands as Orange Goblin, Electric Wizard, Sleep, Red Fang, Black Tusk, and Pagan Altar. In May 2013, a new long track titled Dream Killers was released on a split (vinyl 12” and CD) with Caronte. In October 2013  Doomraiser announce the Drunken Mark III line-up with the addition of two guitarists.

With this new line-up, the band played several shows (some supporting Saturnus, Primordial and Venom).

On the 13th of January the new album by Doomraiser “Reverse (Passaggio inverso)” was released by BloodRock Records, recorded in Rome by Marco “Cinghio” Mastrobuono and Matteo Gabianelli, mixed and mastered by Billy Anderson (Neurosis, Eyehategod, Cathedral, Sleep…)