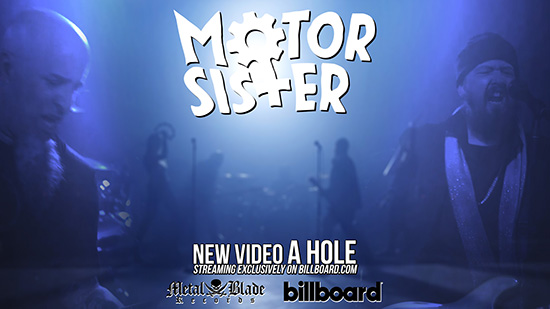 MOTOR SISTER Premiere Video For “A Hole” on Billboard.com

The day has finally arrived and the debut from MOTOR SISTER, Ride is out now on Metal Blade Records! The album can be ordered at metalblade.com/motorsister.

Coinciding with the album’s release the band is pleased to unveil their new video for the track “A Hole“. The video is receiving its exclusive premiere courtesy of Billboard.com. Check out the video directed by Jack Bennett and an exclusive interview with Scott Ian HERE.

In support of the new album Ride, the band is set to play two exclusive California shows this week. March 11th at The Whisky in Los Angeles (TICKETS HERE) and March 12th at DNA Lounge in San Francisco, CA (TICKETS HERE). With very hectic schedules the band will only be able to play select shows, so do not miss your chance to see them while you can! Check out an exclusive interview with Jim Wilson and LA Weekly HERE.

“MOTOR SISTER is a group of musicians whose collective musical pedigrees speak for themselves.” Mother Superior founder, guitarist, and vocalist Jim Wilson fronts the band, with Anthrax’s Scott Ian on guitar, Pearl Aday on backing vocals, Joey Vera on bass, and John Tempesta on drums.

The group was originally assembled to jam for Scott Ian’s fiftieth birthday party. Thanks to Scott’s wife Pearl Aday, who has been working on her solo career with Mother Superior front man Jim Wilson for years, all it took was a quick phone call and the stage was literally set for Scott’s dream gig. “I wanted to cherry-pick a set list of my favorite Mother Superior songs and get these guys together and have the concert at my house,” Ian says of the event that eventually led to an album. That album became known as MOTOR SISTER‘s Ride.

The video for “Fork in the Road” which provides a rare glimpse into the recording of this Mother Superior favorite by MOTOR SISTER can be viewed HERE.