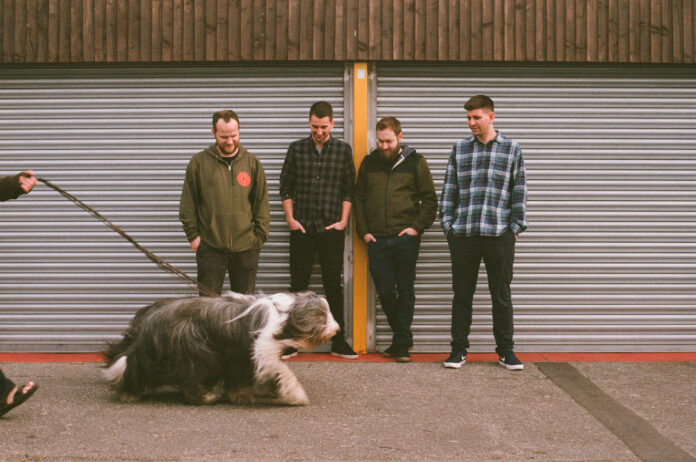 Portsmouth punk newcomers Young Pretorians are pleased to reveal their new single ‘Why Worry?’, which is set for release on all good digital service providers on 8th April 2022.

Another sonic step up for the quick-developing quartet, who have already been tipped as ones to watch by early alternative tastemakers, the track is the first of a batch of two new songs produced by the highly acclaimed Neil Kennedy (Creeper, Boston Manor, Milk Teeth) at The Ranch Studios in Southampton.

An ode to staying mindful and focusing on the present amidst the noise and anxiety of the last two years, front man Pete Darwent says of the single: “I’ve found that as things have been getting more uncertain, I’ve needed to keep reminding myself of what matters and what doesn’t. We’ve all lived through some huge events over the last few years and we need to make sure that we aren’t doing ourselves harm by worrying about things that don’t really matter.”

“We can’t change what’s happened and we waste so much time sitting there worrying about what’s going to happen in the future, or trying to change who we are to make others happy. It’s all just noise. We should focus on the here and now, making that the best it can be. The last couple of years have forced a lot of people to re-evaluate things. If you can spend your time and energy focusing on your friends, your family, your passions, then you’ll be sorted. If this will all end someday then we might as well enjoy it as best we can.”

Become an adult. Get that crappy job that you swore would only be temporary. Fast forward. Somehow you’re still in that crappy job. Getting out of bed is difficult. After months and months of procrastinating you take a chance on something else. Eventually though, you start to figure it out. Bit by bit.

It was against this backdrop in Portsmouth, England that Young Pretorians formed in 2019. The band released their debut EP State Actors in 2021, leading to a sold out debut live show at The Joiners, and their single ‘Average Conversations Between Average People’ being featured on BBC Introducing.

Pete Darwent (vocals and guitar), James Marsh (guitar), Will Pearce (bass) and Mike Parsons (drums) grew up playing music together in bands across the South Coast. Young Pretorians is the culmination of those hundreds of shows, countless songs, and the highs and lows of growing up in soulless towns.

You won’t find songs about clubs and frivolous excess here; Darwent would sooner dissect the apathy and exhaustion of your twenties, or the strain of long distance relationships. These songs are for everyone. From house shows and DIY scene dives to renowned venues, Young Pretorians are the kind of band who take their sermon to the people.

It’s said that in life you’ve got to keep moving forward—that’s exactly what Young Pretorians are doing.