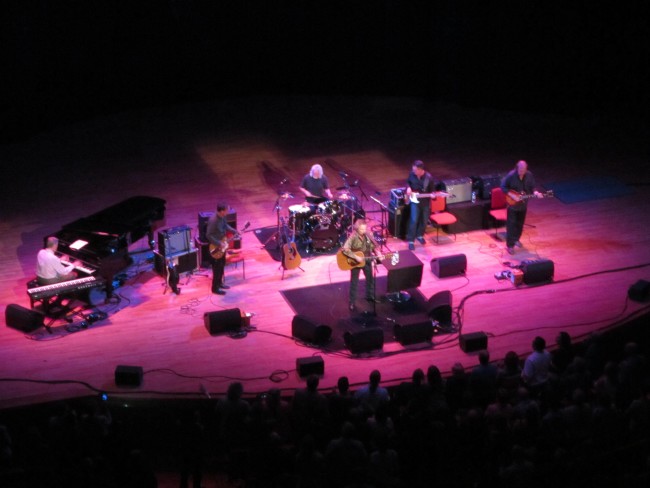 Damian gets nostalgic with the first single he ever bought

Don Mclean is an artist whom I have always wanted to see but never got around to it, well tonight that would change.

In support is a young singer-songwriter from Northern Ireland called Chelsey Chambers, who shared five tracks with us as a precursor to the main event. The songs were nice buy seemed to lack any change of pace in this brief set.

A short interval and the backing band walk onto the stage. Shortly after the artist arrives to milk the applause of a three quarters full symphony hall.

McLean has confirmed in numerous interviews that he doesn’t have a strict set list but obviously covers the songs that die hard fans want to hear such as “American Pie,” “Vincent,”  “Castles in the Air,”  “And I Love you So” and “Crying.” Therefore each night is, in essence, a unique event. All songs were covered here tonight. The set also included a few new tunes which fitted in nicely with the classics.

Mr McLean really doesn’t have to tour these days having recently sold the book to unlock the mystery behind the lyrics of his seminal hit American Pie for the reported sum of £1.2 million dollars. So this guy is here for the love of his art, a true American Troubadour as the tour posters rightly describe him.

The set comes towards it’s conclusion with American Pie. This song has much significance for me, as it was the first record I ever bought from Heavyhead records in Springfield in 1971 and was served by Roy Wood and Bev Bevan who co-owned the shop. This is unless my mind is playing tricks on me, as it was a lifetime ago.

So a night of nostalgia from a true song writing authority. A well crafted and wonderfully executed show which delighted the happy and enthusiastic audience.

This show will live long in my memory.