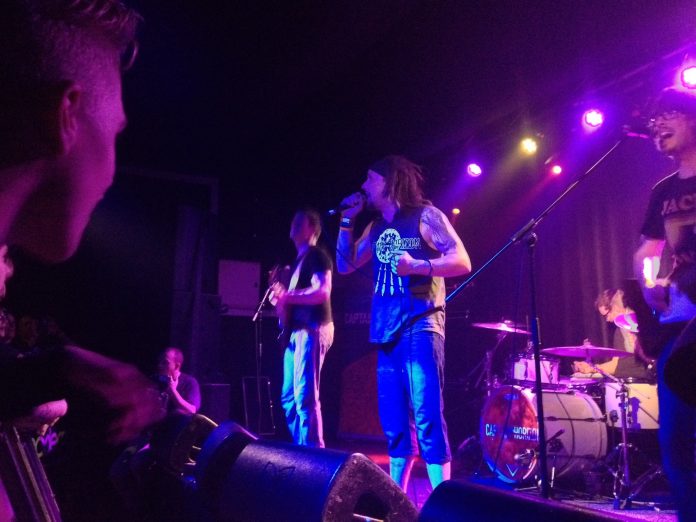 On their Facebook bio it says that Twisted State Of Mind have been playing together since they were 11. Judging by the look of them, that means they formed in the last school holiday. The reality is of course that the Oxfordshire three piece write a very fine line in catchy and hook laden rock n roll. And when they slow it down, as on “The Mirror” they do so to great effect. Luke Ashby’s guitar solo alone on this surprisingly mature work makes them impressive. And when they feel like trying their hands at anthemic hard rock then they’ve got “Home To You” and brilliant closer “To The Light” as a knockout blows here too. A wonderfully ebullient trio to watch out for, Twisted State Of Mind are going places.

“Its Captain Horizon’s night. But for the next 30 minutes….fuck those guys!” grins singer Jamie as members of tonight’s headliners look on, laughing. “We are JD And The FDC’s.” And with that we are off, and as anyone familiar with the band will know that means two things. First it means lots and lots of good songs. And second means it they just keep coming at’cha. As on the other times MVM has seen them, JD and his mates are glorious. Think a turbocharged version of the much missed Yo-Yo’s with a little more snarl and even more hooks and you are close. Choruses? They’ve got em. Hooks? Don’t be silly, they’ve got more than Marks And Sparks. There’s a serious side too. This show is poignantly dedicated to their friend Ringo who’s funeral it was today. He’d no doubt be proud of their performance, because JD And The FDC’s are superb. And after a tumultuous “Burn This City Down” ends things, there’s only one thing left to say: “Yes, yes, yes!” as they might chant themselves.

Tina Turner’s “Simply The Best” plays as Captain Horizon take the stage. Cocky? It’s all relative. As Kid Rock observed once: “It ain’t bragging, motherfucker, if you back it up.” And here’s the thing: over the course of a couple of EP’s and now two full-length records CH have more than made good on that claim. The most eclectic rock band in the second city has long been just about the best at what they do.

The question of what exactly that is has been debated long – not least on these pages – and no definitive answer has ever been found. It is pointless wasting time on such triviality. Just watch them and be glad someone does it at all.

Which brings us to why we – and they – are here. They’ve just stuck out a new album called “Imitation Sun.” It’s brilliant. Its got songs on it like “Can’t You See What I’ve Become,” which is casually played about 20 minutes in, like its nothing special. It is.

The band are always superb live. Tonight, however, they give off the air of kids who have just broken up for the six weeks holiday. Singer Whitty, always hyperactive, is barely restrained here, playing “Stop” from the shoulders of the crowd, while the other three members, bass man Alex, drummer James and guitarist Josh never stop smiling throughout.

It’s a simply superb showing. However you sense that although each song is delivered as though lives depend on it, “My Town” has a touch more significance than most in this context, it’s huge soundscape enveloping the venue.

The hour long set is the perfect mix of old and new. “The Light” mixes with “Work Out Right,” which acts as the closing song on “….Sun,” and another from the new album “Ready To Fall” more than perhaps anything here, encapsulates all that’s wonderful about Horizon in one four minute package.

The single “The Dark” pulses, really coming alive in this setting, while the band even afford themselves an encore and even a much played song such as “Shadows And Vampires” bristles and crackles with new found life. It’s that kind of night – one which sees a show that began with Tina Turner end with a drum solo, just largely because it seems it could.

Surely their horizon should extend to national recognition to go with the accolades they get on a local level. As was said elsewhere, tonight was Captain Horizon’s night and who in their right mind thought they’d blow it? Stunning.