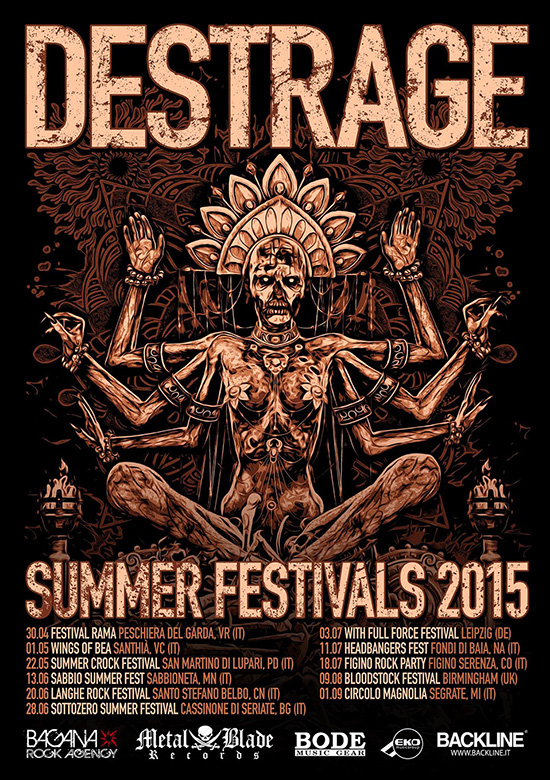 Shows all over Europe – including Bloodstock

Italy’s Destrage have plotted their summer months with a batch of festivals throughout Europe. The first scheduled festival is the April 30th Festival Rama in Italy, followed by appearances at the immensely popular With Full Force (Germany) and Bloodstock (UK) festivals in July and August, respectively. Details, dates, and ticket links can be found at destrage.com, as well as on the band’s facebook page: facebook.com/Destrage. Updates will be posted as they become available.

Drummer Federico Paulovich commented on the band’s summer schedule, so far: “We’re very excited to be back on the road and hit the stages of some of the greatest festivals around Europe such as With Full Force and Bloodstock Open Air! Also, we can’t wait for this summer headlining tour to begin: we’ll be all around our lovely homeland Italy, and it’s going to be a blast! Let’s get this party started!”

Destrage had cameras rolling during their European tour with Protest the Hero last fall and during their headlining Japanese tour in February. The endlessly entertaining antics of the band serve as the perfect subject for such a documentary, and fans would agree that these clips will be as amusing as they are insights into how bands keep themselves sane while wrestling with the struggle of being a tour metal band. Watch all ten episodes on the Bode Music Gear youtube playlist HERE.

Watch Destrage‘s music videos for songs from their latest album, “Are You Kidding Me? No.“, online now at metalblade.com/destrage.