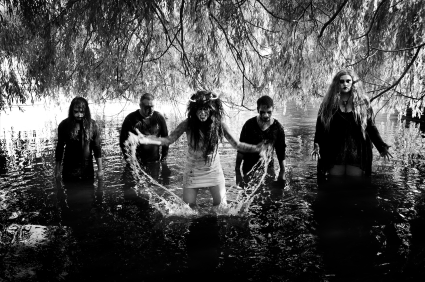 DENIGRATA are an avant-garde black metal collective from the Midlands. Comprised of Denigrata Herself (front woman/guitars), Manea, (keys/operatic vocals), C?ndél (guitars), Legivn (bass) and Tasímengíyi (timbral alchemist), they fuse avant-garde writing and performance that pierces the veil of transcendental black metal. They call it noire concrête.

Formed in summer 2014, they have been working towards the creation, and release, of their debut album Missa Defunctorum from the word go. This subversive five-piece have given a unique twist to the bleak soundscapes of black metal, fusing a furious fiery wrath with sweeping melodies, acidic screaming and operatic vocals clashing against the natural desolation of a traditionally cold genre.

Bands come together from all walks of life, and for all kinds of reasons. DENIGRATA’s origins are rooted in the unlikely setting of higher education. With all members possessing degrees in music, and Denigrata Herself currently working on a PhD, the hallowed halls of academia have given this band the technical and contextual knowledge to complement their passion and drive.

Missa Defunctorum is sung entirely in Latin. It takes the form of a Requiem Mass, otherwise known as a mass for the dead and follows the same structure as Mozart’s Requiem Mass in D minor. Of their choice to sing in Latin, Denigrata Herself commented: “Latin is a dead language so by using it, it resurrects and recharges a dead mode of communication; a living person screaming a dead language that praises existential transcendence through blackened, obliterating performance.”

There are a great many requiem masses but Mozart’s is particularly significant because he knew he was dying when he composed it. He died before he finished it, his wife Constanza and his students completing it for him, choosing to repeat the opening overture as the da capo al fine. This gave the whole structure a cyclic format, ad infinitum, expressing infinity. The essence of life and death is sewn and captured in the musical phrases and motifs, the sadness, anger and rapture are equally represented in musical form. It is this essence that has significantly influenced Denigrata’s composition and performance, a requiem mass that houses the cloying tar of life in parallel with the bliss of death. 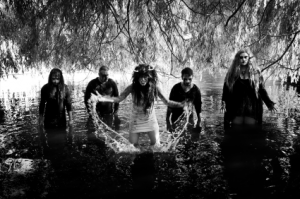 Missa Defunctorum mixed and mastered by Neil Hudson at Initiate Audio and Media. Artwork and design by Matt Vickerstaff of Darkwaveart. Band photographs by Ester Segarra.

DENIGRATA’s debut album will be self released on November 23rd following a special release show at the Church of the Holy Sepulchre in Northampton on November 21st.