Defy All Reason Look To The Future 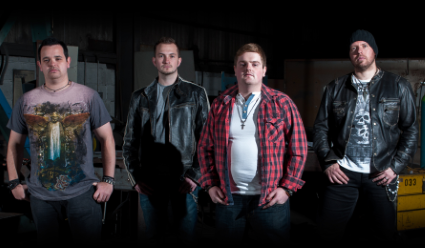 Welsh band’s debut out next month

The Road Ahead’ is the new album by Defy All Reason. A foot to the floor recording of heavy rock that’s set to get pulses racing when it’s released this May.

From the opening notes of ‘Midnight Train’ it’s clear ROCK music is alive, kicking and screaming in the valleys of Wales. A collection of dark (Bad Blood) and light (Behind Those Eyes) ‘The Road Ahead’ offers something for all fans of hard n’ heavy rock music.

The new album follows Defy All Reason’s debut EP ‘Every Second Counts’ which met to critical acclaim and saw the band take to UK stages with the likes of Breed 77, Jake E Lee’s Red Dragon Cartel, Jettblack, Trapt plus Hammerfest and more.

“It’s exactly the album we needed to make right now” said Defy All Reason frontman and guitarist Gavin Lee Jones. “Having the time to write and hone our material whilst sharing stages with some amazing bands has been invaluable experience for us, we’ve learnt so much since the first ep and I think we’ve stepped upto the plate with this album”.

Weighing in at 54 minutes and with the body count at 13 tracks, ‘The Road Ahead’ showcases a young band with blood n’ guts a plenty and nothing to lose. “We wanted to make sure we gave ‘bang for buck’ with this album” guitarist Darren Jones chipped in “The Road Ahead is exactly as you find us, take it or leave it. The fact is, in a digital age where music has become too easy to come by, we fully intended to record these 13 songs and release them as a complete album. It’s an experience, a time capsule of 4 musicians from Wrexham in 2015 and if we were to do things how we wanted, we needed the flexibility of delivering our new album effectively but on our own terms. So working with Pledge Music suited us perfectly”.

(N.B Defy All Reason reached its target well within the countdown and at time of writing, the total continues to rise).

Gavin explains “We’re fully aware of the ever changing shift in styles of the way music can be procurred, the damage illegal downloading has caused and the effect it all has on us as musicians, so when the option of self releasing the album ourselves with a Pledge Campaign was put on the table, we grabbed it with both hands. It’s meant we’ve been able to continue engaging with our friends (aka the fans) and offer them unique products and experiences that are limited in numbers – something digital doesn’t really give us as consumers.”

Sonically, Defy All Reason have kept ‘The Road Ahead’ in the family, with drummer Todd Edwards on engineering / mixing duties at Yew Tree Studios and the band sharing co-production credit. The album was mastered by Pete Maher, whose recent work includes Jimmy Page andThunder’s latest Top 10 album ‘Wonder Days’.

“Whilst we produced the album as a band – Todd’s an unknown genuis when it comes to production, he’s great at really stripping songs back to the bare bone and building them back upto a higher level. Pete Maher is a legend, to have someone of his calibre involved in this album is an absolute pleasure” said Darren.

Defy All Reason are: