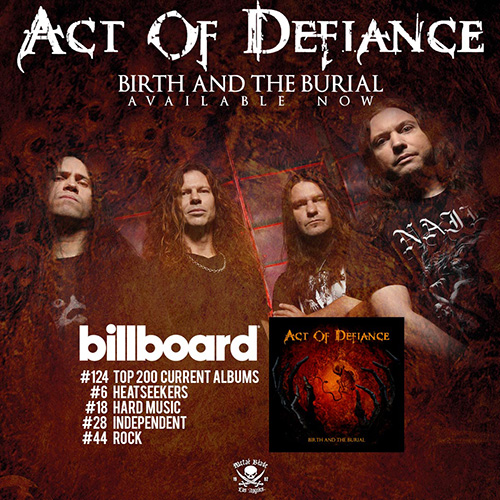 ACT OF DEFIANCE, featuring ex-Megadeth members, Chris Broderick (guitars) and Shawn Drover (drums), have debuted at #24 on the Billboard Top 200 Current charts with their inaugural recording effort, Birth and The Burial, via Metal Blade Records. The other chart number positions are listed below.

Look for them to embark on their first-ever national tour, co-headlining with Allegaeon starting Oct 22nd. All dates can be found at facebook.com/actofdefiancemusic.

With a hefty resumé that chronicles time spent riffing and shredding in Jag Panzer, Nevermore, and a seven-year stint in Megadeth, Chris Brodericks pedigree speaks for itself. Furthermore, joined by powerhouse drummer – and fellow Megadeth alumnus and former Eidolon drummer – Shawn Drover, bassist Matt Bachand (Shadows Fall) and vocalist Henry Derek (ex-Scar The Martyr), the band are a truly formidable metallic behemoth. Birth And The Burial is ten tracks of armor-plated, state of the art heaviness.