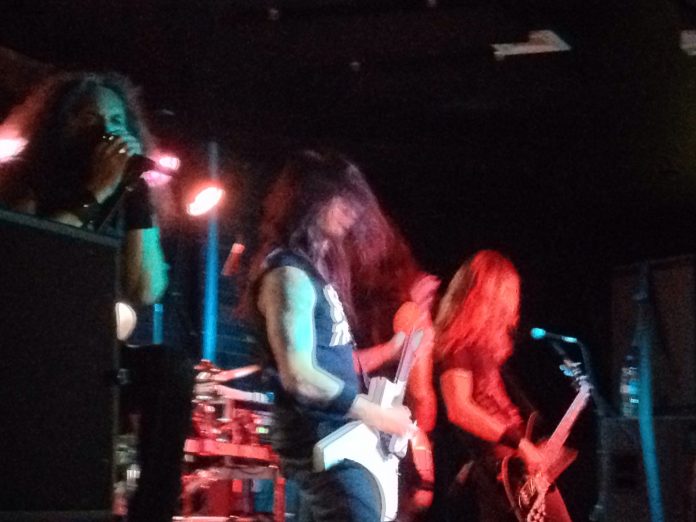 Californian thrash kings make a bid to get the big four increased by one.

Even if Our World Below? Weren’t rather good we’d like them. Firstly because we like anyone who clearly enjoys playing live. But more pertinently there’s this. What amounts to their mission statement: “heavy music, but open minded, unrestricted by genre boundaries or pre-conceptions.” It could be this website’s bio too. It isn’t, but that wonderful sentiment comes over throughout their set. All the metal balls you can imagine go up in the air and what comes down sounds just dandy. “No. Five” screeches along in some fast lane or other, while the closing “Face Machine” adds a size 12 bootprint of a groove to things. Aggressive yet accessible. Just the way modern metal should be. Our World Below? would probably agree.

At 9-44pm precisely, come the words that have started a million gigs in the last few decades: stand up and be counted, for a what you are about to receive…the band sings it might have a few quid.

The thrash metal royalty that this heralds is stood feet away from MVM while all this is going on, singing along. Maybe it’s this love for metal that still drives Death Angel. Since forming – like every other seminal thrash band – in the early 1980s. The Californians have had two periods of activity. Now on their second time around they are down to one original member in Rob Cavestany – although we’ll give them that his friend, singer Mark Osegueda has been here since 1984 – but time has not diminished that fire.

“Left For Dead” which opens things tonight, comes in waves of viciousness, while “Claws In So Deep” is a barely tamed animal with its rapid fire machine gun drumming. Both those songs are from recent DA output, which proves that this ain’t a backwards looking affair – more than half the set is from the last couple of records.

“Buried Alive” which at seven years old is a veritable relic, adds a real groove, but the old school classic “Mistress Of Pain” (ridiculously, nearly 30 years old!) can still curdle the blood, and dammit if Osegueda doesn’t still scream like a kid half his age.

The rest of the 90 minutes rockets past too, showing just how wonderful modern thrash can be. Case in point, the superb “Truce” from the “Relentless Retribution” album which emerged at the tail end of the last decade. That they can follow it up with a track as visceral as “Third Floor,” more than twenty years it’s senior, is to their credit.

As things approach their crescendo, Death Angel stop off at “The Dream It Calls For Blood” which is delivered with such passion that you can’t ignore it and it says much for the intensity elsewhere that the snotty “Bored” is introduced as a “chance to relax.”

As they finish here – appropriately – with a whirlwind “Thrown To The Wolves” we can reflect on a simple truism. Keeping it so real they don’t even do an encore, this is not a band that has gone all hard rock and experimental on us, and orchestra’s are (thankfully) conspicuous by their absence. This is high-top wearing, studded belts, horns up and thrashing like a maniac. And all the better for it.

Death Angel: For those that rocked, we salute you.