End Of Daze, hailing from Weymouth, Dorset UK are a passionate young metal band who combine elements of their collective favourite genres. From the melodic guitar work of bands such as Iron Maiden to the pure hate spouted from Australia’s Thy Art Is Murder, from the ever-evolving sounds of Slipknot to that of metalcore kings Parkway Drive. The result is a high energy and melodic sound driven by powerful verses, hard hitting breakdowns and blistering lead guitar work.

The current line up came to life when guitarist Jack Wood met drummer Jason Jones, bassist James Walden and vocalist Harry Shooter at college and recruited them to his cause after having formed the band in 2013 but until then had faced a revolving door of musicians passing through the ranks. Surrounded by a solid outfit of dedicated musicians End Of Daze immediately hit stages throughout their local scene and quickly established themselves as a band on the rise and one to watch. Guitarist Wynter Prior would be the latest addition and joined the band during the recording of the debut album. 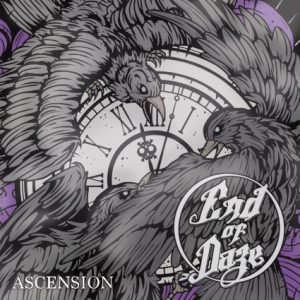 With their scopes honing in on the wider scene, early 2015 saw the band take up residence at SVM Studio in Poole, Dorset with producer Pash Stratton, to track their debut record, ‘Ascension’. Eight songs and an intro telling stories of personal experiences and inciting strength in the face of adversity, big choruses and huge guitar driven passages is the end result and of which will be unleashed on 14th September 2015.
www.facebook.com/EndOfDazeUK