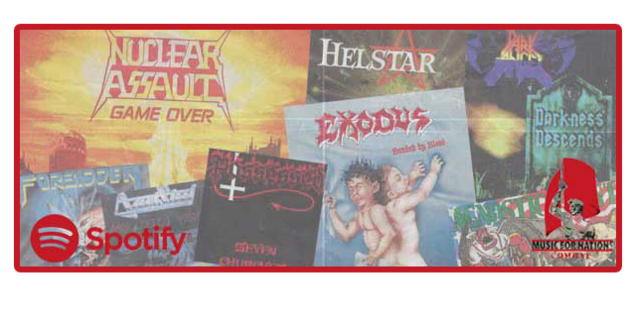 Legendary New York Metal and Punk label, Combat Records, have teamed up with Music For Nations to make available, digitally, many classic albums from the 1980s and 1990s.

Created in 1983, Combat proved itself one of the major players in the developing Thrash Metal scene by signing and releasing multiple albums by genre defining acts Exodus, Nuclear Assault, Dark Angel, Possessed, Agent Steel, and Forbidden amongst others. They also released the debut album by Megadeth; ‘Killing is My Business… and Business is Good’.

As well as thrash and metal, Combat also played a pivotal role in the Punk and Hardcore scene by working with and releasing critical albums by Sick of It All, Agnostic Front, Crumbsuckers and Circle Jerks.

Working with the recently resurrected Music For Nations label in London, these seminal records are now available to Download and Stream for your usual outlets. For many of them it’s for the first time.

Music For Nations’ label manager Joel De’ath explains, “When I worked with Sony Music on bringing back Music For Nations I scoured the extensive Sony Music archive to see what else was out there that rocked, and along with a Sony Music Germany colleague, Robin Steen, we’ve worked on making this incredible Combat catalogue available. These are some of my favourite albums ever and I’m stoked on getting them up online.”