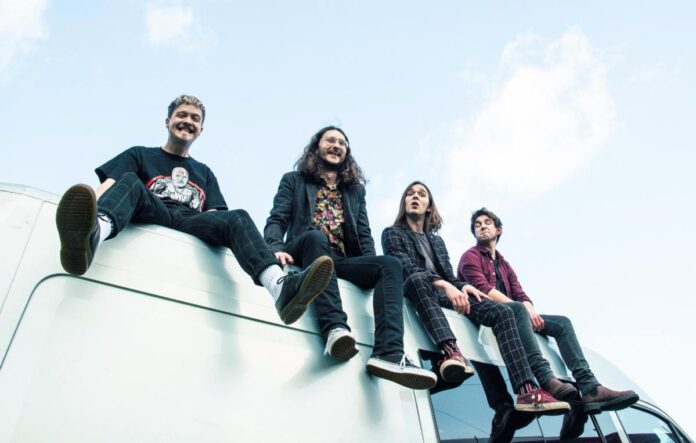 Bristol blues-punk squad, MOTHER VULTURE have revealed a glimpse into the next era of the band via their new single, ‘Honey’, which lands today (Thursday 19th May). You can stream or purchase the track here.
The four piece have spent a blistering few months of non stop touring. Shows with Reef, Bokassa, A and Michael Monroe, as well as festival slots at Leopalooza, Burn It Down, Riffolution and 80Trees have been turning heads left and right towards a band that simply refuses to slow down. May is set to be similarly hectic with the release of ‘Honey’ and a string of UK dates to back it up.
Despite their growing reputation as masters of the live performance, it’s in the studio that the band spent the first quarter of this year and ‘Honey’ is the first taste of what the band have to offer in 2022. The track is MOTHER VULTURE’s catchiest and grooviest earworm yet, showcasing that they’re as at home on the radio as they are on stage at Bloodstock or ArcTanGent. The track is a pulsing and sassy cry for independence in a world that always seeks to put people into boxes.
MOTHER VULTURE‘s tour dates rack up as follows:
Thu 19th May – BIRMINGHAM Asylum 2Fri 20th May – BRADFORD UndergroundSat 21st May – LINCOLN Call Of The Wild FestivalSun 22nd May – MANCHESTER Star And GarterMon 23rd May – EDINBURGH BannermansTue 24th May – NEWCASTLE Head of SteamWed 25th May – LONDON The Black Heart

The band are also set to play sets at Bloodstock Festival on Thursday 11th August and Arctangent on Wednesday 17th August.
Tickets are available for all shows. Grab yours here and check out the tour trailer below.