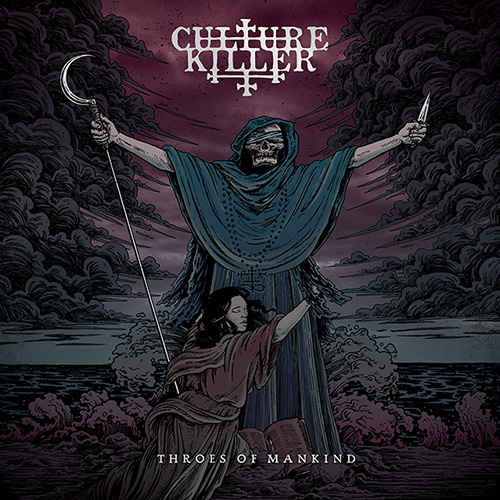 Florida’s Culture Killer announced their signing with Metal Blade Records in May of this year. Now, they are finally poised to launch their campaign for their debut full length, “Throes of Mankind.” The album will be released on November 27th via Metal Blade Records. “Path of Reflection“, the first cut to be released from the record can be heard now atmetalblade.com/culturekiller.

“Throes of Mankind” was engineered by Austin Coupe and Kenny Gil at Pig Pen Recordings, mixed by Kenny Gil, and mastered by Alan Douches at West West Side Music. Culture Killer described the tracking process as “the smoothest, most fun process we have ever experienced.” Guitarist/vocalist Hunter Young added that “Kenny and Austin are old friends of ours, so honestly it was just an all around amazing experience.”

The Culture Killer lineup is rounded out by vocalist Ian Campbell, guitarist Trevor Kopp, bassist Collin Townsend, and drummer Dylan Blow. The band delivers pummeling metallic hardcore with violent, malevolent fervor. Musically, and lyrically, the band can simply be described as disgruntled and malevolent. The band would argue this is warrented given the current state of the world. Hunter Young explains: “The album hits on specific topics that the world is currently, and has been battling. Such as: racism, human trafficking, pedophilia in the pulpit, addiction, and the digital age ruining real human communication.”

Culture Killer is the platform the members use to discuss topics they deem to be important. Not merely important, but topics they feel should be under discussion. They feel ultimately that “using the band to do anything other than talk about the evils and tragedies in the world would be doing an injustice to the listener and to ourselves.”

As previously announced, Tennessee’s Whitechapel are hitting the road throughout November with Australia’s Psycroptic and new Metal Blade label mates, Culture Killer. The tour will be visiting cities throughout the Midwest and east coast, including some places the band has never been to, before. Tickets will be on sale on Friday, September 25th at 10:00am local time.