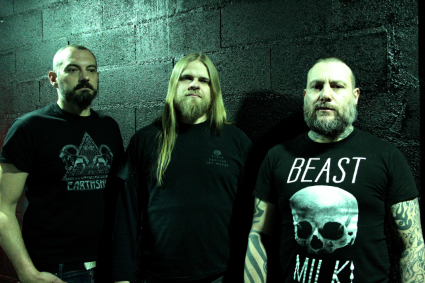 Discussing the song, “most people on this planet are hiding their true personality or more precisely their soul behind an invisible veil.  They build this veil in an effort to protect themselves from reality or each other,” says guitarist/vocalist Stephane Azam.  “’Serpents’ represents this very human habit and details how in doing so, it drives us to a darker side of our soul; we become shrouded from everything including ourselves.”

Hissing electronics, charging guitars, and splashing cymbals of a minimal yet completely effective drum machine, CROWN’s sound is further emboldened by a massive, oppressive bestial roar.  Describing the band’s caustic music, Ave Noctum notes, “if Front 242 had been formed by members of Neurosis and Isis with lead weights chained to the guitar strings.. good.  Very good.”  “Nearly every song pounds with the thunder of Neurosis, Cult Of Luna, or Batillus; yet I’m also hearing some recognizable Godflesh as an influence which should certainly speak to some,” comments New Noise Magazine.

Natron will impact national metal radio on August 11.  Nick Simone of award winning promotion company The Music Syndicate will be in charge of the radio campaign that begins this weekend with  “Serpent” being serviced to radio in advance of album’s forthcoming release.  “Terrifying-absolutely terrifying,” notes Simone.  “That sums up my thoughts on the band pretty succinctly, I think.”

CROWN will tour Europe with Agalloch beginning July 28 in Berlin and ending August 24 in Greece.