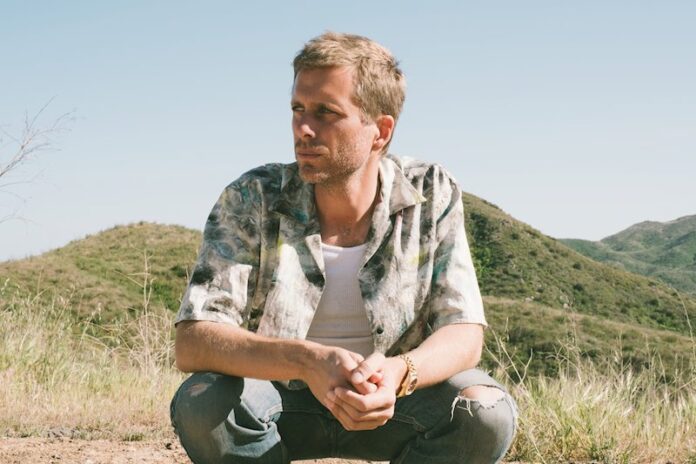 Today, diamond-selling alternative act AWOLNATION officially released their highly anticipated covers and collaborations album My Echo, My Shadow, My Covers and Me,via Better Noise Music. The album’s epic track listing was revealed earlier this winter and includes collaborations with Beck, Jewel, Portugal. The Man, Taylor Hanson of Hanson, Brandon Boyd of Incubus,  and more. The project is a collection of masterfully crafted and carefully curated covers, with each track featuring at least one acclaimed musical artist with whom AWOLNATION’s founder Aaron Bruno has a personal connection. See full track listing below. The aim of the project is to illustrate the healing power of music and to celebrate the collaborative spirit of the artistic community. My Echo, My Shadow, My Covers and Me is now available to stream and download across platforms HERE.

AWOLNATION earlier this week announced dates for their headlining “Falling Forward” U.S. tour featuring special guests Badflower and additional support from UK-based alternative act The Mysterines. Tickets are on sale to the public today starting at 10am (local time) athttps://www.awolnationmusic.com. A full list of upcoming shows can be found below.

Aaron Bruno said the following of wanting to create this project in reaction to the mixed emotions that came with 2020’s lockdown, in conversations with with TV/radio personality and music journalist Allison Hagendorf: “I know a lot of artists and everybody deals with fear differently, and my way of dealing with it was to never stop moving. And so that’s why I just started making a covers album instead of feeling too defeated by everything getting shut down. I thought, ‘Well at least if I stay busy and stay active, I’ll feel productive.’ It also allowed me to be prepared to make original music as well because the last thing I wanted to do is release Angel Miners, which is the fourth AWOL record and then just make the fifth one right away. It didn’t feel appropriate. I didn’t feel emotionally capable because I just said everything I wanted to say on that album, so this was a great palate cleanser for me.” Fans can find more of their conversation on AWOLNATION’s social media platforms and YouTube.

See below additional commentary from Aaron Bruno on each track from the album.

To celebrate today’s album launch, the band also premiered an official music video for one of the tracks, an epic cover of ABBA’s classic “Take A Chance On Me,” featuring Grammy-winning singer-songwriter Jewel. Animated by award-winning film writer, director and editor Eliot Charof, the whimsical video is playing now HERE.

Jewel said of the collaboration, “ABBA is legendary! Their songs are hook machines, and recutting this song with Bruno was so fun. Aaron did all the heavy lifting, so all I had to do was sing.”

The first official offering from the project, a powerful reimagining of Scorpion’s “Wind of Change,” featuring Portugal. The Man and Brandon Boyd of Incubus, has earned millions of streams since its release in January. John Gourley, frontman of Portugal. The Man said of the collaboration, This song marks a very significant point in my childhood. My dad pulled me to the TV in 1989 to watch the fall of the Berlin Wall. It was the first time I truly became aware of the world around me. We wrote a song about that experience called ‘1989’ Like many others, ‘Wind Of Change’ sticks to that memory for me.”

Boyd added, “This track has been drifting around in my headspace since I first heard it as a kid in the 1990s. It never occurred to me that it would be a great song to cover until Aaron suggested it for his project. The deal was doubly sweetened when he told me John from Portugal. The Man would be joining us as well. I’m thrilled to be part of it!”

In their exclusive reveal of the album’s title and release date, Billboard spoke with Bruno about his core mission for this collection of songs and collaborations: to illustrate the healing benefits music brings and the power of connection within the artist community. Bruno explores mental health through a personal conversation with fellow musician Elohim in collaboration with The Jed Foundation (JED), a leading mental health nonprofit. The conversation, to be held this month, is part of Bruno’s ongoing commitment to raising awareness for mental health through the album’s release. Bruno is also making a generous donation to JED’s mental health awareness efforts.

Since then, the band has released two additional tracks from the project. “Beds are Burning (Featuring Tim McIlrath of Rise Against)” gives a futuristic, raw, and gritty twist to the 1987 Midnight Oil classic. McIlrath said of the collaboration, “When I met Aaron years ago at one of our shows at the Coliseum in L.A., he disclosed his past time spent in hardcore bands, and we bonded over that. I’ve always been a fan of his, both as a person and his music, so it was an easy decision to guest on his version of Midnight Oil’s ‘Beds Are Burning.’ It didn’t hurt that I also love the song and all it stands for. I’m really impressed with the ways in which he made it his own because it’s not an easy song to reimagine.”

Originally recorded by Midnight Oil, drummer Rob Hirst gave their stamp of approval, stating, “A tough new light on our old song! The whistle near the end is a deft touch…congrats AWOLNATION and Tim on doing a brilliant job!”

And then last month saw the release of an infectious cover of Madonna‘s classic “Material Girl,” along with Taylor Hanson of pop music sensation Hanson. Taylor Hanson added, “My first introduction to the project was simply the idea of working on an unexpected cover song, and a project that would have many different collaborators as a part of it, and that had my interest. The song ‘Material Girl’ was surprising on several levels, because it’s a song I would never expect either AWOLNATION or HANSON to cover. I loved the challenge of covering the song and staying true to the composition, while giving an authentic interpretation that I was proud of. I think the combination of the track Aaron built and the vocal arrangement I was able to contribute is a dynamic combination.”

To follow the covers project, AWOLNATION is currently working on a new album with original music, after most recently celebrating the 10th anniversary celebration of the group’s platinum debut album Megalithic Symphony, which spawned the rare DIAMOND-certified “Sail”, and releasing their 2020 album ANGEL MINERS & THE LIGHTNING RIDERS. Featuring the hit single “The Best” and collaborations with Rivers Cuomo of Weezer and Alex Ebert of Edward Sharpe & the Magnetic Zeros, ANGEL MINERS was the band’s first album after signing to Better Noise Music and was praised by both critics and fans upon release.