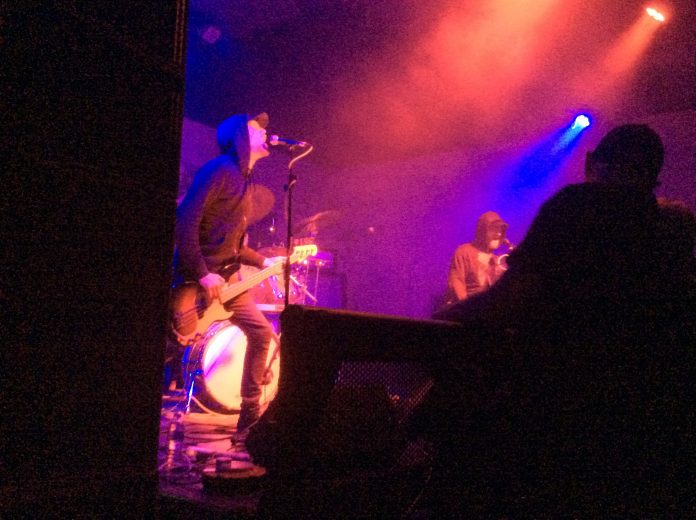 Doom in all its forms as Conan hit Birmingham.

German trio The Moth can certainly lock into a mighty groove. That’s probably a given at a gig like this where, let’s be honest, the riff is mightier than the sword. But when The Moth do it they add a hypnotic psych-like swirl to their songs. Their intresting approach extends to their dual male/female vocals approach. Freden and Cecile meshing together wonderfully well to add to the hypnotic feel, and when Freden sparingly uses his growls it only adds to the sound. Cecile sports a Black Sabbath patch on her shorts, and the masters themselves would surely approve of the slow, intoxicating brew that’s being served up. Feet frequently on the monitors a la Maiden, The Moth are certainly a spectacle. It’s easy to see why there’s been such a buzz (sorry!) surrounding this Hamburg based mob, because there’s enough here to suggest they could be very special indeed. This is sludge metal, but not quite as we might be used to it.

Birmingham’s Ki know how to make an entrance. After some rather grandiose electronic stuff seems to go on for ages, they take the same approach to starting a song. The three piece deal in fuzzy, lengthy doom reminiscent of Earth. What this means in practice is that anything – pretty much – can happen, but that it’s largely superb, whatever it is they attempt. Great, huge slabs of intricate metal mix with soaring lead guitar parts. As the music seemingly wanders and takes a look around, an almost prog feel abounds, with the quiet bits almost as important as the loud. The set lasts for half an hour and takes in three songs, ending with a freak out of a gallop just for good measure. Those looking for verse-chorus-verse might as well go somewhere else. Those that like a challenge in their music will have found much to enjoy throughout a glorious set – the guitar work on its own so special as to make Ki a band to watch.

Whether industrial doom is actually a genre or it’s something we are making up, MVM isn’t too sure. But how the hell else you describe Khost is beyond us. As we are dealing with such complexity, let’s go for some basic facts. They are local. There’s two of them. They don’t bother with a drummer and they make music that is almost frightening  in its intensity. Their new album “Corrosive Shroud” is out on Monday, and you are most certainly not going to find it in the Easy Listening section of your local HMV. This is a cold, harsh and bleak landscape interspersed with the odd haunting chant and deathly scream. There is nothing approaching a conventional song here, but that you suspect, is rather the point. Andy Swan and Damian B, who are the men behind this incredible sonic maelstrom, haven’t spun this particular web for any other reason than they wanted to make these pieces of music and this sound.

Conan arrive onstage with the biggest riff of the night. That is really everything you need to sum the Merseysiders up. Even a night such as this they still manage to pummel the competition into the ground with a concrete block.

With singer Jon Davis and bass man Chris Fielding dressed in hoodies and baseball caps there is something of the street gang about the band. Certainly the way they have taken on the record industry – and largely won – is surely testament to their battling qualities.

In many ways they are the most influential band in underground doom, Davis with his label and recording studio, Fielding the producer that is most in demand with bands of this type, and their sound is interesting enough to match that billing. Chris and Jon often sing the same line, and with recently added drummer Rich pounding away, this as uncompromising in its own way as the band which preceded them – albeit a touch more accessible, but only a touch.

The trio deliver slow and deliberate sonic violence. And in “Foehammer” they’ve got a song with well over 100,00 YouTube views. The incredible video matched by their performance of it here. There is also a new track, slated to appear on their new, as yet to be recorded, LP, evidence is that will be a treat too. Perhaps best of all, however, is “Battle Of The Swamp” with its urgent instance and its crushing blows.

For nearly an hour tonight there is no let up whatsoever. To break it down to its most simple. Conan are incredible at what they do, and no one is brave enough to sing doom quite like this except them.

There are those that would have you believe that doom metal all sounds the same and is all about Black Sabbath’s riffs rewritten. The four very different bands on this bill tonight prove that theory to be ridiculously wide of the mark. The quartet might have their roots in the same soil, but they are all off in very different directions. And perhaps most importantly, Conan reinforced the belief that they might actually be the new kings of the underground.