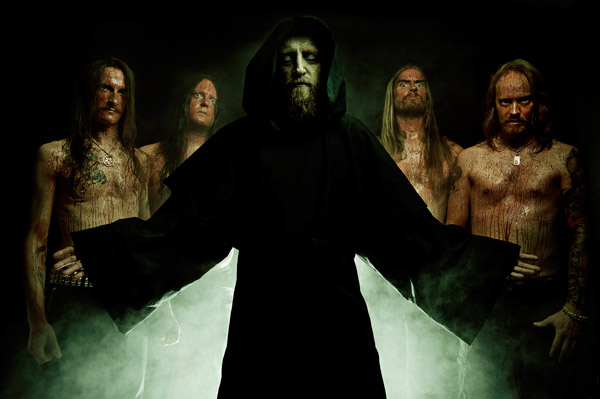 Sweden’s masters of horror, Bloodbath who released their fourth album of supreme death metal – Grand Morbid Funeral in November last hear have announced a one off London show on 18th December at the Electric Ballroom.

For the past few months Bloodbath have taken their brand of supreme, unrelenting death metal across the globe to the likes of Tuska Open Air, Hellfest, Sweden Rock Fest and Maryland Deathfest but with no sign of a UK performance. Now after close to a year of waiting the 13th candle will finally go out…

Blakkheim (guitars): ‘We always intended to include UK in one of the 13th live morbid funerals this summer, but since none would have us, it’s time we take over the steering wheel. For the first time in the band’s career, Bloodbath will give you forsaken souls of olde London Town a grand morbid club gig! Come December 18th, come ye winter BLOODBASH!’

Nick Holmes (vocals): ‘It has been a hellish summer for the dark souls of Bloodbath, filled with blood, gore and misery but we shall feast on the rotting flesh one final time this year in London.’

Bloodbath is a titan of death metal from Stockholm, Sweden, notable for the inclusion of Katatonia, Opeth and Paradise Lost members.

Following the departure of Opeth’s Mikael Åkerfeldt and months of speculation and rumour, Nick Holmes was announced as the new vocalist of Bloodbath in 2014.

Formed in 1998 with a mutual fascination for horror & the glory days of death metal (especially the old Florida & Stockholm ‘Sunlight’ scenes), the band has remained a leading light of extreme metal since their Breeding Death EP was unleashed back in 2000, and a formidable force for 15 years, further cemented by their devastating – and most successful album to date – ‘The Fathomless Mastery’ in 2008.

Recorded once again at Ghost Ward Studios and the City of Glass Studios in Stockholm, and mixed by David Castillo, ‘Grand Morbid Funeral’, Bloodbath’s fourth full-length studio release, is undoubtedly the band’s darkest and dirtiest opus yet; an organic collection of filth-ridden tracks straight from the grave, boldly eschewing the approach of somewhat over-produced modern death metal in favour of something altogether more rotten to the bone.   With eerie doom-like melodies mixed with raw and savage riffing, and featuring a number of guest appearances including Chris Reifert and Eric Cutler from US gore-masters Autopsy, ‘Grand Morbid Funeral’ is a new high-point of brutality for Bloodbath.

Tickets on sale  from  – www.myticket.co.uk