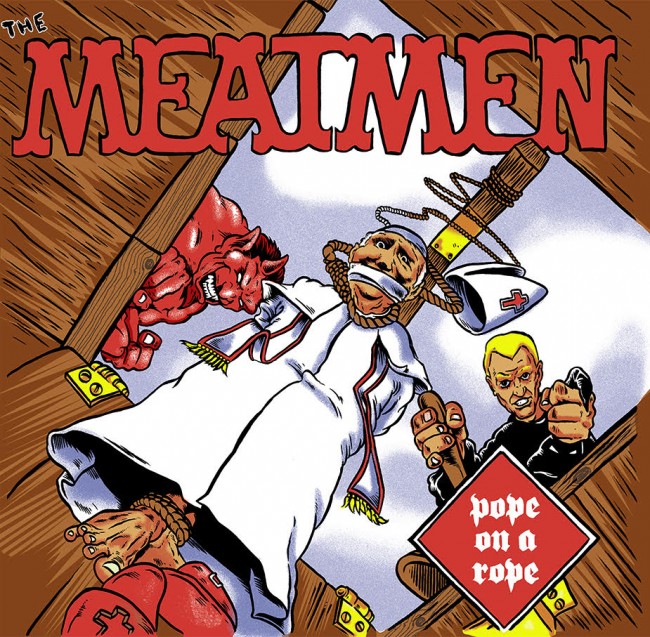 The Meatmen update their classic

They say good things come to those who wait and this one has needed to happen for a while now.  Weenbags of the world rejoice as The Meatmen’s classic album Pope On A Rope is finally getting a vinyl release and will be available worldwide on November 27th, 2015 for Black Friday through Self Destructo Records.

Punk rock in the 1990’s is largely remembered by bands who broke it big and were anything but threatening and hostile, something that doesn’t fly in the world of Tesco Vee and all the others who came before and with him in hardcore.   Originally released on Tesco Vee’s own Meat King Records in 1995 on CD, the album has been long out of print since and was the last album of original material released before the 2014 comeback that was Savage Sagas.  It was a departure from the traditional three chord attack that was prevalent on the other Meatmen releases and experimented with a speed metal style (i.e. pounding double kick, riffs and riffs) but still had Tesco’s tongue in cheek humor constant.

The sixth album in The Meatmen catalog carries on Tesco Vee’s god stomping agenda of offense as no one is spared from his lashings.  Pope On A Rope consists of sixteen antagonizing tracks that touch of topics of Tesco’s ideal phallus positioning [“Real Men (Hang To The Right”)]/(“Ball Peen Baby”), elitist music critics (“College Radio Loser”), giving tribute to fellow Middle America hardcore act Gang Green (“Alcohol”) and anchor tracks in their live sets (“I Want Drugs”/”Pope On A Rope”).  Everything about this album is a big, provocative middle finger to PC crusaders around the planet.

Self Destructo Records will be pressing this in a very limited quantity of five hundred and will come in transparent red vinyl with artwork redrawn and updated with Pope Francis image by Detroit based artist Craig Horky.