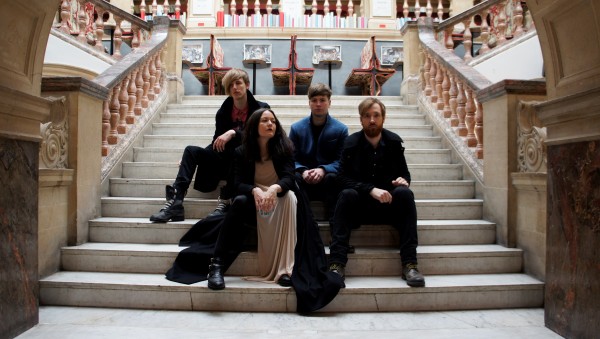 May release for new one

Cold in Berlin announce their new album The Comfort of Loss & Dust will be released on 4th of May by Candlelight Records. 10 tracks of unprecedented scope and power, recorded at Gun Factory Studios, London and Mastered by Jaime Gomez Arellano (Sunn O))) and Electric Wizard)

A black mass of punk rock, doom-gaze awaits the listener, fired by the Gothic imaginings of vocalist/lyricist Maya. With its dark soundscapes spun in haunting imagery and a feeling of the uncanny, The Comfort of Loss & Dust plays like the aural accompaniment to a Hermann Hesse nightmare. The down-tuned guitars and powerful drums create a tide of sound; carrying Maya‘s vocals as she twists and writhes through the murky waters of love, loss and bone-shaking lust.

“The album travels. We draw from diverse, supernatural landscapes. From the Yorkshire Moors to the barren beauty of Iceland, from India to the Catacombs beneath Paris. All share a similar mystery – and for me, are tied up with some form of loss. I think the listener will travel with us.” -Maya.

The record’s centrepiece is the seven-minute Mysterious Spells – a post-mortem of youthful abandonment and a terrifying journey into today‘s exotic hell. Electricity crackles, Tibetan singing bowls ring and prayers are offered as the band completes its metamorphosis into a new kind of audible beast, Cold in Berlin at their darkest, heaviest andshin-shattering best.
“With this album, definition is difficult but pain resonates throughout; the powerful sound of survival,” – Maya.
Following on from their critically acclaimed debut album Give Me Walls (2010, Cargo) and the 2012 follow up And Yet, this release will be the band‘s second album on pioneering independent label Candlelight Records.

Since forming in 2010, London-based Cold in Berlin has played throughout Europe alongside some of the most revered alternative acts, graced major festival stages and won praise from influential publications including Q, Mojo, Metal Hammer, Rock Sound and Clash. Last year saw Cold in Berlin cement their position in the UK’s underground scene with a lauded appearance at Whitby Goth Weekend and a presence in the Terror and Wonder exhibition at the British Library