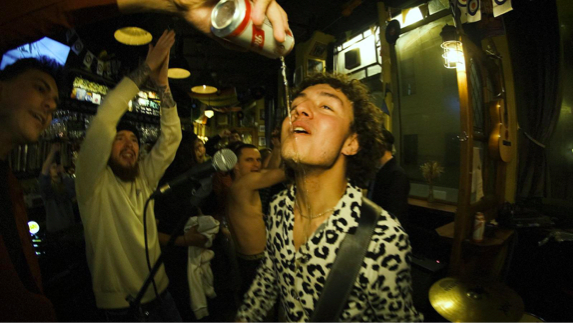 You only need to try it once and you’ll lose all your inhibitions and self-control. And that’s actually what happened when The Chaseloaded up on their new single ‘Trumpet’, piled into The Marquis pub in Covent Garden, London, and instantly instigated chaos among revellers who included members of other righteous rock ‘n’ rollers including The Rifles, San Quentin, Maze, JW Paris, The Skinner Brothers and A.R.T.

Those scenes are captured in The Chase’s new video for ‘Trumpet’, which imagines a tongue-in-cheek scenario – what would happen if everyone’s favourite ska instrument proved to be so mind-alteringly addictive that it was banned? Within seconds of The Chase starting the song there’s madness wherever the eye can see: dancing on the bar, beers in the air, the pub’s excellently named landlord Tommy McGuinness leaping around like a lunatic. You might need to sneak off to the toilets to share some ‘Trumpet’ away from the glare of the meathead bouncers, but if something can bring this much happiness, how can it be wrong?

The Chase frontman Tyler Heaney says, “Chaos in abundance is the best way to describe the video shoot, it was bouncing in the pub, even the ‘meat head’ couldn’t resist a blow on the Trumpet! A huge thank you to everyone involved, especially Tommy at The Marquis for letting us run riot! A cheeky bit of Trumpet never hurt anyone!”

Continuing the legacy established by the likes of The Specials, The Beat and The Dead 60s, ‘Trumpet’ is a ludicrously fun burst of ska rhythms and indie-punk vitality which makes a fresh case for The Chase’s rising status. They added to the acclaim received by their ‘Not The F*cking Game Show’ EP as ‘Trumpet’ was named as John Kennedy’s X-Posure Big One at Radio X, Record of the Week at XS Manchester, and BBC Introducing airplay from Dean Jackson.

The Chase were founded by the Heaney brothers: the fiery, flamboyant vocalist/guitarist Tyler and drummer Dion. Their Scottish father introduced them to everything from The Beatles to Oasis to N.E.R.D. while the sound of their mother’s roots in St. Kitts and Nevis adds a vibrant set of influences to set them apart from the pack. Formed on a council estate in Nottingham, the brothers added Luke Childs(bass) and James Cahill (keys) to complete the line-up and as their sound evolves in surprising new directions with every release.

The video also showcases the relentless energy and in-your-face charisma that the band exude in the live arena. They recently completed a co-headline tour with fellow next wave band Spangled, played shows with The Skinner Brothers, The Rifles and The K’s, and made a big impression at festivals including  The Isle of Wight, Truck, Y Not? and The Great Escape. Their plans for 2023 are now taking shape, with gigs at London’s Colours (May 5th) and a homecoming show at Nottingham’s Metronome (May 19th) already confirmed. Tickets are available HERE.