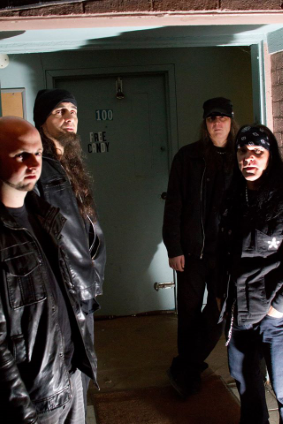 US metal band celebrate a decade of aggression with new one

CAUSTIC METHOD has spent a decade committed to filling the void in modern metal with raw unapologetic aggression and passion. The band’s undying work ethic and bullshit-free brand of American metal has seen them share stages with the likes of HATEBREED, AMERICAN HEAD CHARGE, OTEP and countless others. In late 2014, CAUSTIC METHOD inked a deal with Pavement Entertainment for the release of The Virus. The infection spreads on June 2.

Caustic Method can be personified with one word – persistence. A spoken true, All-American-Metal vibe, with a gritty full meat and potatoes delivery and relentless in every way. A four piece band based out of NYS, They are fronted by vocalist Matt Caustic, Darin Scott on Guitar, Angel Rivera behind the drums, and Eric Maliszewski on bass rounds out this powerhouse quartet. This lineup has proved solid, hard hitting, and in your face heavy.

As the band put it: “When the second helping is all you crave, then the true Virus takes over.Hear it, live it, become it, escape it. Lose yourself in everyone and everything. You are now the Caustic Method.”