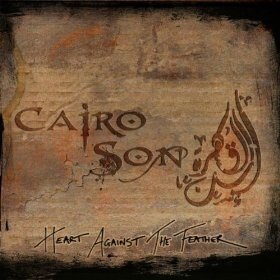 Your humble scribe never kept a diary. Entries from teenage years such as “went to school, was ok, came home and listened to music.” Wouldn’t have knocked Adrian Mole off the top of the best sellers charts. Even as we got older, yeah, there might have been mentions of girls called Helen or Sara, but nothing worth troubling the Samaritans over.

Even at our most miserable, though, we would have struggled to elucidate our thoughts in quite the way that Cairo Son do. At times, this debut eight tracker seems so personal that it seems we are peeking into a private hell. You aren’t sure whether it’s all taking place in your headphones or the confessional box in church. Not since Alice In Chains stuck out “Dirt” have words been this raw.

The man behind these lyrics, Magdy Abdel-Rehim, clearly has a lot of angst to get out in his music. How about this from “Burned With Spite” which begins thus: “Feel disconnected, scared, confused and blind/I long to disengage from the threat that lies inside.”

Or this from “Confession”: “I’ve cut myself so I can bleed/Raise up my arms until the wound is out of reach/Let the blood flow till I’m down on my knees/pray to god that he will end my misery.”

This is a record so real, so brutal that on occasion it is uncomfortable listening. Perhaps aware of this “Troubled Man” urges us “don’t try to understand what’s going on inside.”

Over the course of its half an hour or so, “Heart Against The Feather” manages to take the listener on journey to a dark place – and if you thought that sex might cheer Magdy up, then think again. On the sensual “Now That You’re Here” a funky, almost Hendrix like riff gives way to a tale of a relationship that verges on the sadomasochistic.

Make no mistake, this is a quite incredible record, one which sometimes musically echoes the magnificent Richie Sambora solo record “Stranger In This Town” (Sambora is thanked on the credits), it veers from rock to blues and almost sounds like the mighty Clutch in places. The stunning guitar work here is good enough to warrant listening to the record on its own, but when you add in the rest of it, it adds up to something that frequently becomes stunning.

Best of all is epic closer “Promises” which begins with chanting before becoming something akin to a stoner band playing the blues, it’s huge chorus of “a lifetime of promises won’t help to mend a broken heart” is a fitting postscript to this album.

A record to cherish, “Heart Against The Feather” almost feels like revelling in someone else’s pain and misery. On this occasion such schadenfreude is surely allowable.

Learn how to get a song on itunes at ReverbNation.com