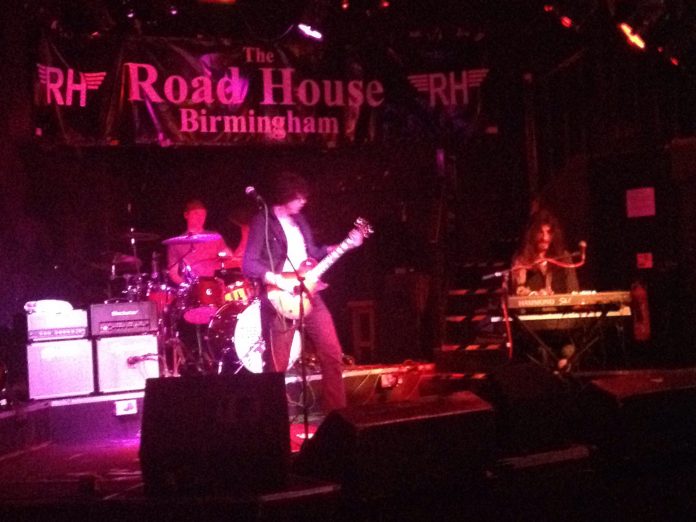 “It’s been a strange old few weeks,” says Tom Walker. It turns out that the eponymous star of this trio has been without a car meaning that his choices have been limited. “All I’ve been able to do is play music and drink,” he says. MVM can make no comment on the latter, he’s clearly practiced the former. Songs like “Tore Down” are the work of a talented individual, while “Harder To Say” is a little bit of a funkier take on blues. Walker is very obviously a guitar player of huge skill and his understated manner is in total contrast to his flamboyant playing. Evidently the embodiment of letting the music do the talking, the Tom Walker Trio are incredibly eloquent musicians.

Speaking of a trio of musicians that can play a bit, North Yorkshire’s The Mentulls are so talented it’s almost ridiculous. The three – Andrew Pipe on guitar and vocals, his brother Jamie on Keyboard’s and Nick Colman on drums – have criss-crossed the country at breakneck speed over the last few years, and have played with anybody who is anybody in that time. Often lazily tagged as purely a blues band, there are prog and classic rock elements to this mix that make the band pretty unusual as well as unusually good.

One minute they are tearing through the organ heavy instrumental “Reflections” the next it’s Hendrix’s “Red House” and it’s that type of eclectic evening. It’s also a night which sees the band try out some new material ahead of a follow up to their “Time Flies” record, which is due next year. One of these fresh tunes, “Commotion” has a rock feel before Andrew Pipe adds his prodigious flourishes.

“On The Road Again” is choc-full of bluesy intent, and allows the guitarist to play a stunningly dexterous solo before it’s end. However, the three are able to move so effortlessly between genres that it scarcely seems important, and one glorious jam sees Deep Purple mix with Led Zep before Colman is given his moment in the spotlight with a drum solo.

Another new song, “Passage Of Time” is aired, and seems to distill all that’s great about this band into about four minutes. It’s got rock, groove, blues, Hammond Organ, and it is absolutely superb – if this is the type of thing we can expect in 2015 then the new album might be a touch special, a thought that is only cemented by “Be Home Tonight,” which immediately follows. It is nothing less than timeless rock music, with it’s roots in the classic 70s sound, pretty much like The Mentulls themselves.

As well as being prepared to doff their caps to the greats of the past, the band show a refreshing willingness to not restrict their covers to those you might expect, with Aynsley Lister’s “What’s It All About?” getting a spruce up.

Their own material is best, though, and “After The Rain” has a fragile quality, before exploding into an enormous blues piece, it is perhaps is the best thing played in this 90 minute set. A jaw-dropping solo follows, but they leave us with “Theme From An Imaginary Western.” Covered by many, yes, but rarely this well.

The sparse crowd means that the band might have more enjoyable nights. It does however, showcase a pretty special group that they are are able to play this well to so few people. They deserve better, The Mentulls are are crazy good.