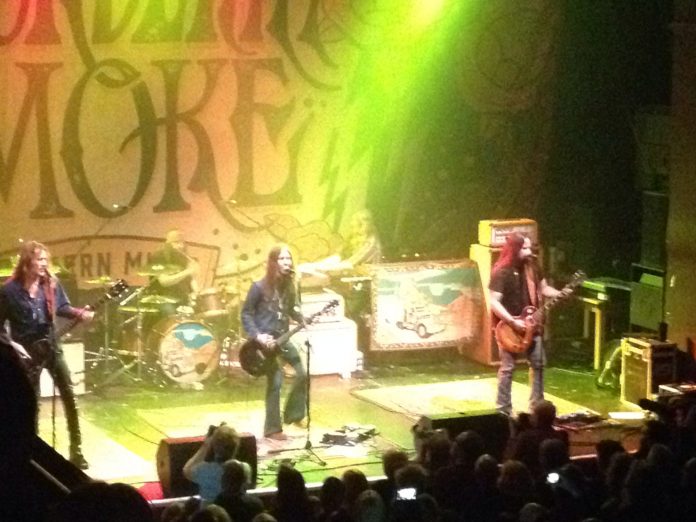 You have to love the Blues. Perception wise, to paraphrase Billy Bragg – and in a totally different context – it’s old men playing axes. The reality is somewhat different.

Take Aaron Keylock for example, he’s 16 years old. When MVM turned 16 we hadn’t even been to a concert, let alone followed up an appearance at Bloodstock with UK tour. Keylock is another of the wonderful young blues artists in this country, like Oli Brown, like Virgil and the Accelerators and all the rest. “We’re gonna kick the evening off with a little rock n roll,” he says and Keylock and the rest of his blues trio do just that. Dressed in bell-bottomed flares and playing Johnny Winter numbers, these are not your average kids. What they are, however, is prodigiously talented and there is real quality here. The three are good when they go for driving, thumping rock. They are stunning when they switch to world-weariness with the slow and brooding “Just One Question.” Oh, and they aren’t half good when they boogie, as on “Give Me A Chance To Explain” either. There is a passage on his website from a review which says: “I doubt Rory Gallagher was this good at 15.” Who knows? But what is absolutely beyond discussion is this: now 16 and a “veteran” of 300 shows, Keylock is so full of potential it’s frightening how good he could be.

From a genuine overnight sensation to rocks longest serving one. For all the hype surrounding “The Whippoorwill,” you’d think it was Blackberry Smoke’s first go on the rodeo – it’s actually far from it, and “A Little Piece Of Dixie” preceded it a few years ago. It is fair to say though, that the rise of Blackberry Smoke has been pretty incredible. The quintet only played their first show in England just less than 12 months ago, played sold out shows back in the spring and there is precious little room in what is a far bigger venue tonight.

Indeed if the band do allow themselves time for reflection then they might just think that this tour is country rock’s equivalent of a tikka tape parade.

The beauty of this particular BS is in it’s simplicity. Starting tonight’s show with “Like I Am” the band appear not to have a care in the world, as a little slice of middle America makes it’s way to the Midlands UK. “Pretty Little Lie” adds it’s catchy slide guitar lick to a tale of an affair, “Six Ways To Sunday” follows and sees singer/guitarist Charlie Starr planning to “do it like it’s never been done.” He doesn’t mean musically, as there are countless good ol’ boys that mix country with rock n roll, but there are damn few that do it this well.

As American as the Stars and Stripes and Momma’s Apple Pie, Blackberry Smoke possess a rare and glorious authenticity. That is to say, they could only make this sort of music and they would have made this music if no one was here watching. Appearing as though they have yearned to follow this particular wandering star all their lives, drummer Brit Turner for example, behind his beard and covered in his bandana, was surely born to play the skins in a band such as this.

Musically the tedious are-they-country, are-they-rock debate has long been negated by the fact they are brilliant, and tracks like “Sleeping Dogs Lie” walk the line (puns intended) between the two superbly. Given a chance to breathe here, the band jam with the song like The Grateful Dead in a honky tonk as keyboard man Brandon Still gets his chance to shine, before a neat segue into The Allman Brothers “Midnight Rider.”

Elsewhere the cheery, simple and downright beautiful “Everybody Knows She’s Mine” is a highlight: “I’m the luckiest man in the world!” Exclaims Starr during it’s airing, you suspect he means it. The title track of the most recent studio slows things down, before “Up In Smoke,” which is surely the best Credence Clearwater Revival song that John Fogerty didn’t write, burns everything to the ground.

“One Horse Town” is perhaps the best thing here. Ostensibly a song about about small town frustration, it brings the type of universal quality that is usually reserved for greats like Steve Earle and Bruce Springsteen, it speaks to everyone here. It’s followed with “Ain’t Much Left Of Me,” which is an explosion of exuberance wrapped around an enormous chorus.

A riotous “Leave A Scar” with it’s Skynyrd loving solo is played as an encore, before things end with what amounts to the Smoke anthem, “Shakin’ Hands With The Holy Ghost.”

Tonight Starr travelled from Atlanta, Georgia and asked 1200 Brummies to sing the chorus to “Ain’t Got The Blues” he got his wish. “When you think about it,” he smiles, just before, “everything is pretty damn great.” He does so with the air of a man who knows that his time is now. Southern Rock has got it’s new crossover heroes. Blackberry Smoke are unstoppable.