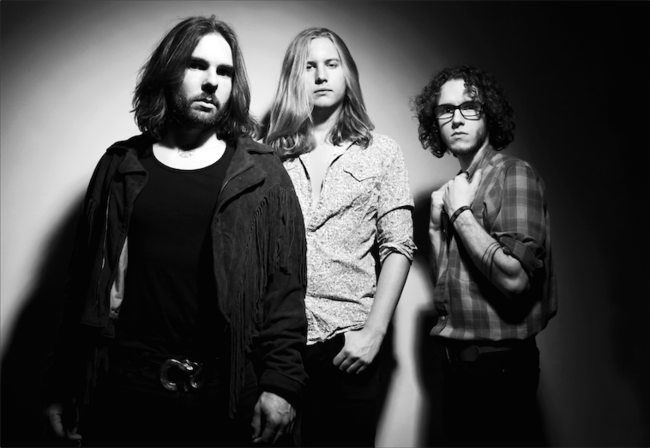 New single out soon – and its produced by Tony Reed of the mighty Stone Axe
They promised they would be back with new material before the summer, they kept their word: London heavy trio BRIGHT CURSE are back with a super fuzzy new single “Shaman”, right on time before hitting the European roads this Spring.
New single “Shaman” comes along another song entitled “Fear The Lord”, both being available on the band’s Bandcamp as well as all digital platforms on March 20th. The tracks were recorded in London, and mastered by Tony Reed (Mos Generator, Stoned Axe) at HeavyHead Recording studios.
BRIGHT CURSE‘s frontman Romain Daut comments on this new material: “We wanted to record a single with our new bass mästare Max to show the evolution in our sound, so we wrote “Shaman” in January and recorded it in February. With this song, we tried to find a way between old school riffs and lumberjack heaviness. Max brings more energy and feeling to the band, and I think it’s all over those two songs. It’s a brand new alchemy for Bright Curse.“
BRIGHT CURSE will head back to the studio later in 2015 to record their second album to date. The trio will hit the road on March 16th for a short Euro tour.
UPCOMING SHOWS:
16.04 (FR) HÉNIN-BEAUMONT – Végas Café
17.04 (FR) ROUEN – Le 3 Pièces
18.04 (BE) LIÈGE – Péniche InsideOut
19.04 (CH) BASEL – Secret Place
20.04 (FR) TBA
21.04 (FR) TBA
22.04 (FR) TBA
23.04 (DE) GÖTTINGEN – Vinyl Reservat
24.04 (DE) HAMBURG – Bambi Galore
BRIGHT CURSE rose in May 2012 in London from the ashes of French psychedelic band Soul Manifest (Night Tripper Records). A few months later, the psych doom trio brought to life their first self-titled debut “Bright Curse” to life, which was recorded by J.B Pilon in London and mastered by Brad Boatright at Audiosiege in Portland. It didn’t take long until the band gained international recognition thanks to their unique sound imprint, and inked a deal with German label Bilocation Records, who released a limited vinyl edition of the band’s debut album in 2013.
These last two years has seen the band going uphill, for BRIGHT CURSE went on a full UK tour with Trippy Wicked and Wight, and were invited to play significant heavy music events in Europe (Desertfest London, Up In Smoke Fest, Glad Stone Fest), sharing the stage with the likes of Earthless, Colour Haze, Truckfighters, Pentagram, Naam or Mars Red Sky. Enjoying their current momentum, BRIGHT CURSE are now established with their new bassmeister hailing from Sweden, Max Ternebring, and are ready to release their new record some time in 2015.
BRIGHT CURSE IS:
Romain Daut – guitar & vocals
Zacharie Mizzi – drums
Max Ternebring – bass