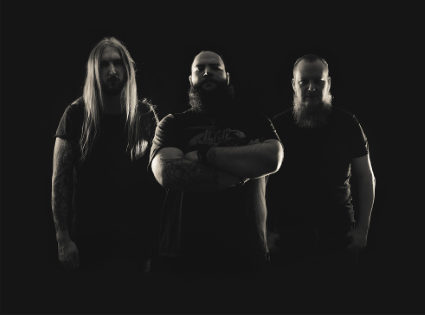 New Feared album out this week

FEARED have become one of metal’s imaginatively fiercest and musically adventurous propositions, but their creative tempest is about to get darker and more voracious with the release of new album “Synder”. Uncaged on May 25th, the new beast of inventive brutality and seduction is the band embracing new intrusive explorations and melodic raptures in their ever ravenous sound, a fresh adventure which will leave fans with hairs rigid on the back of their neck as welcomed nightmares circle overhead.

Formed in 2007, Feared was the brainchild of guitarist and producer OLA ENGLUND, but from a potent start it soon disbanded. The heart and presence of the band though continued to breathe through Englund and the numerous instrumental songs he recorded and released on YouTube as tutorials. It was 2010 which saw Feared beginning to re-emerge when the guitarist and vocalist MARIO RAMOS (Demonoid) worked on a self-titled debut album; a release swiftly earning acclaim and support from fans and media alike. The energy and passion of the band only grew and blossomed from thereon in, as equally its evolving sounds. The following year saw the greedily received “Rejects” unveiled, as well as a re-recorded and remixed version of their debut album called “Refeared”, both pushing the band into broader attention. They were followed in 2013 by praise soaked third album “Furor Incarnatus”, it similarly whipping up a torrent of eager responses and new spotlights.

It was eclipsed in exploration and imagination, not forgetting acclaim, by “Vinter” a year later though. The album came after a period between releases which saw Englund also become the new guitarist of Swedish comrades The Haunted, drummer Kevin Talley (Suffocation, ex-Dying Fetus, ex-Black Dahlia Murder) additionally join the ranks of BattleCross, and ex-Clawfinger bassist Jocke Skog recruited by and bringing Feared another surge of new energy and thought. It all only strengthened the intensive passion and inventive appetite of the band, as well as sparking fresh avenues to investigate in sound, all evidenced dramatically in “Vinter” and now with even greater adventure on the forthcoming “Synder”.

Meaning sins in English, “Synder” is the blistering success of Feared pushing their limits and imaginations into darker depths and intimate challenges once more yet emerging as provocative and expansive landscapes of furious sound and unbridled emotion. Produced by Englund and Skog, and wrapped in the striking artwork of Sylvain Razorimages, “Synder” is the most intensive collaboration within the band yet; a sonic emprise breeding one explosive tempest and inspiring intensive roar from the heart of Feared.

Band, fans, and the metal world may never be the same again once the sins of Feared and “Synder” come out.