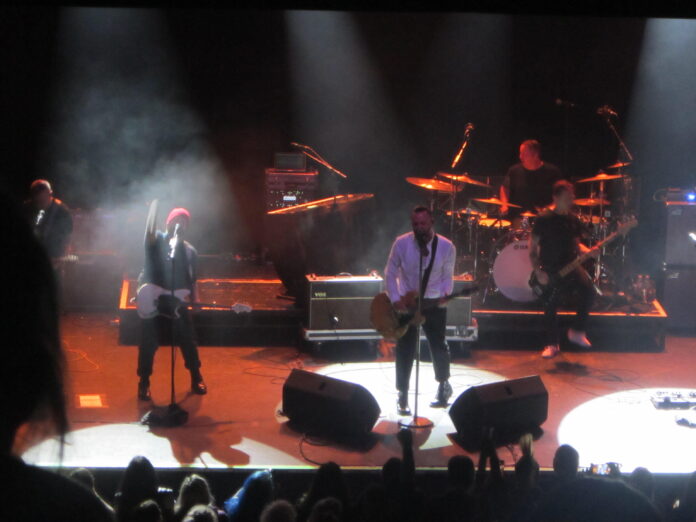 I saw Blue October here at this same venue just over three years ago, February 2019. That night I sat upstairs with the ground floor area packed but where I was upstairs it was sparsely occupied so around one thousand people. Tonight however, I`m back upstairs and it`s standing room only and a couple deep trying to see over the balcony, so around fourteen hundred expectant fans.

What has happened, I really don`t know. This show has been put back but I have seen relatively little publicity generated to consider that tonight would in essence be sold out. But I shouldn`t be surprised I said last time that this was a band of gifted musicians, who produce an energetic performance live and really connect with the audience. They share personal thought-provoking lyrics over some catchy melodic tunes. So, i have to say I was really happy for them finally gaining the recognition they richly deserve.

I was really looking forward to tonight`s special guests Daytime TV as I`d reviewed their debut album `Nothing`s On But Everyone`s Watching` and said that they are in essence a band that are made to fill out a stadium. The Huffington Post also pinned them as `the heroes British rock needs right now`. Sadly, thirty minutes is never enough for a band you really want to see but they took full advantage with an assured performance which had some blinding rock outs with songs like `Little Victories`, the pounding `Ugly` and `Zombie` amongst them and from the response of the crowd this may have been a short but sweet introduction to this band that have the talent to dominate the British rock scene. Will, Chris, John and Gareth shared that they will be back soon and it does seem like a tour to promote the recent release is almost pencilled in. I don`t need to tell you to ensure you obtain a ticket for this band who seem to be on the cusp of something really big.

The lights dim and the instrumental number `The Still` is piped through the pa as Blue October walk on stage and head into the opening number the edgy `Daylight` before moving into the ballad like `The Way I Used To Love You` and anthemic `This Is What I Live For`. The guys deliver what have to be three of my favourite tracks with `Say It`, the hypnotic `Into The Ocean` where the audience are encouraged to sing along and `Hate Me` an intense song written about the singer`s own drug addiction and depression. In between these tracks is `Oh My My` a number off the latest release, which has the faithful clapping along. The show progresses with stadium anthems, mid-tempo rock outs and melodic ballads which include `Fear` which is introduced by singer Justin sharing a story about his addiction struggles and how it affected his young daughter and parents and how it made him the person he is today. Crowd pleasers such as `Home`, `I Hope You`re Happy` and `Fight For Love` have everyone jumping, dancing, waving arms and singing along before the show closes out with `Debris` a composition that encompasses so many moods and is stunningly larger than life.

It`s not long before this troupe returns and offers a wonderful stripped back interpretation of the beautiful `Calling You` before the venue is lit with mobile phones as the intense `18th Floor Balcony` drifts out. `Only Lost Is Found`, the dreamy `Sway` and the uplifting `Moving On (So long)` closes out this intriguing performance.

Blue October are a very interesting band who share personal thought-provoking lyrics over some captivating melodic tunes and leave you with songs to almost treasure that will run through your head for days after the show. I found once again that a Blue October event was overwhelmingly inspiring and left the show once again with lots of thoughts to reflect on.