2015 sees the 35th anniversary of the band Blitzkrieg.  Although their debut single (on Neat records) was released in 1981, ‘Buried Alive b/s Blitzkrieg’  it was not till 1985 that the band recorded their debut album as vocalist Brian Ross was involved with his other band , Satan recording and touring their debut classic ‘ Court In The Act ‘ . .

30 years on because of catalogue sale and resale ‘A Time Of Changes ‘ is lost in the vaults of corporate hell and may never see the light of day again. That said the current line up of Blitzkrieg wanted this album available to fans so they have completely rerecorded the album and added two bonus tracks . ‘Too Wild To Tame’ which should have made the LP back in 1980 but for time restrictions of vinyl then would not fit !  It was eventually recorded by another Neat records stablemate , Avenger.

The second bonus track has never been released before though written at the time . ‘Jealous Love’ was the last song penned by the Ross/Sirroto partnership which fueled the early version of the band . .

All the classic tracks are here too on this album including many still played live today which included the Metallica covered ‘Blitzkrieg’ track .

It also features guess twin guitar appearances on ‘Pull The Trigger’ by Satan’s Russ Tippins and Steve Ramsay.
Great new artwork has been commissioned for the new version too by South American artist Ivan Chacon fronting a new 12 page booklet full of sleeve notes by  Brian Ross , lyrics and new photos from the past and present line up..
The album will be release in Europe by the band’s long time label Metal Nation Records. 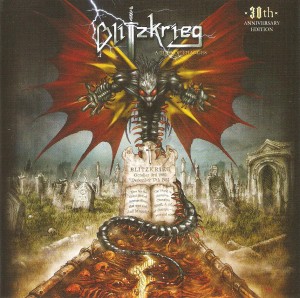 The South American dates will be the last for this year. Dates available from the band’s site www.blitzkriegmusic.co.uk .