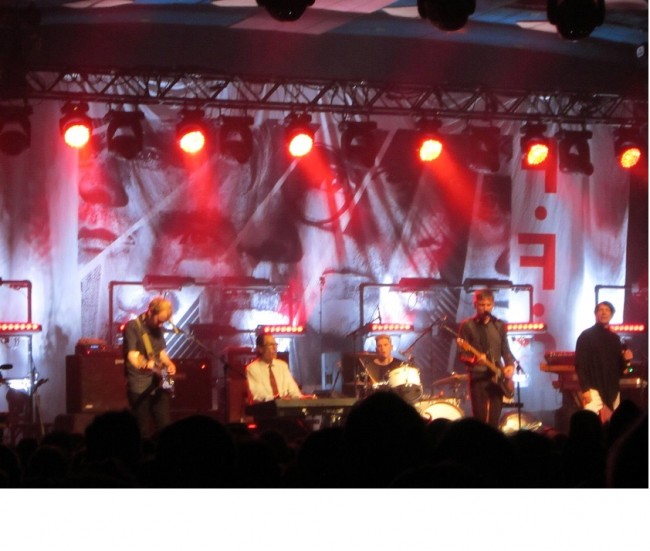 Last week, our Damian went to Glasgow to watch his favourite band – and they had Scot indie boys Franz Ferdinand there too

Well, they say good things come to those who wait and having taken ten years for this collaboration to get off the ground the FFS debut release is a marvellous piece of work. Tour dates were announced and having missed out on a Sold out show in Manchester, I managed to procure tickets for the Glasgow event. The Franz guys hailing from Glasgow would give it an extra fizz as well.
The Barrowlands is a venue I’d seen but never been to and have always wanted to get there so I was really looking forward to my visit. The venue originally opened in 1934 but was rebuilt after a fire and reopened in 1960. Just after nine the lights go down and out come the band/bands!! “Johnny Delusional” kicks the show off with Ron Mael`s haunting piano introduction followed by the first line spoken by Alex Kapranos, then joined by Russell Mael to share vocals on this high energy song about unrequited love.

The place is in uproar as the crowd literally bounce up and down. “The Man Without a Tan” follows next, a ditty about a good looking fella that all blokes fear. “Police Encounters” returns us to the high energy tempo and any song that can make lyrics like Bomp bom diddy diddy sound good and stick in your head for days after is great in my book.

The first of the covers arrives in the form of the Franz song “Do you want to” and again the crowd goes into meltdown. A chance to chill out follows with “The Power Couple” a song about fearing a couple of successful friends visiting and trying to ensure that they are suitably impressed by all you have. “Little Guy From the Suburbs” laments how a life hasn’t turned out as planned. “Save me from myself” a paranoiac outlook on life follows before we get “Things I won’t get” It`s a song that expresses the thoughts of someone who will not achieve certain things in life but finds satisfaction when they see the person they have ended up with, Wonderful highbrow lyrics including such names as Satre, Schoenberg, Charles and Ray Eames, the Manic street Preachers would be proud. This song reminds me of the Scissor Sisters at times with the gelling of Russell and Alex’s vocals.

The wonderful “So Dese Nu” is next up and I must admit I had to Google what the hell this meant. It’s Japanese and it’s a way of agreeing to something someone’s said so there you go. At least we get educated by this Supergroup. The first Sparks classic is shared with “The Number one song in Heaven” and again the place is ripped asunder. Franz’s “Michael” is next before we get Sparks’s “This Town aunt Big enough for the both of us” and forty years on everybody is singing along word perfectly with this timeless masterpiece. The moment arrives for the best part of the show, where septuagenarian Ron steps up from the keyboards, undoes his tie and dances like an insane ice speed skater for a couple of minutes before readjusting his tie and returning to his seat behind his piano as if nothing had happened.

It’s a wonderful moment and the audience are left ecstatic. “Dictator’s Son” continues the show, a tale about a son escaping the clutches of his despot father and reflecting about returning to overthrow him one day. The Franz classic “Take me out” sends the multitude into frenzy and if things couldn’t get any more fevered the show ends with “Piss Off” probably the best put down in the world.

I defy anybody who will not be singing this for days after hearing it. The guys leave the stage to frantic applause. The boys return and it’s straight into Spark`s “When do I get to sing My Way” “Call girl” about somebody waiting and praying for a lover to call is played before the night is ended with the inevitable song “Collaborations don’t work” A special mention must go out to the unsung heroes and powerhouse of this supergroup, the Franz boys Bob Hardy on bass, Nick McCarthy on rhythm guitar and Paul Thomson on drums who keep this slick show ticking over.

What can I say, I was literally drained after this show. What words can I share that can express the experience that is a FFS event. Delirium, ecstasy, elation, joy and euphoria but I have to admit Sparks are my favourite band. This was my best gig of the year by far and I’ve witnessed some crackers so far. I’m sure people are saying stop now FFS!!! so I will