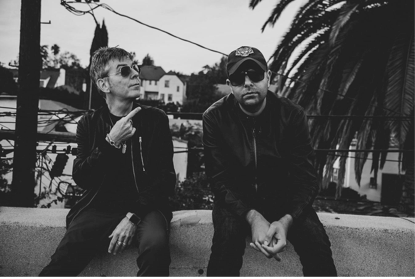 “This song is for the kids who are being bullied as well as people and families who are fighting battles to survive,” says Kav Blaggers of BLITZ VEGA about their new single ‘STRONG FOREVER’ which is released today, November 18, 2022 via FutureSonic Records/CEN/The Orchard. “Mental illness and depression can stem from feeling helpless. When all the odds are against you, you stand tall and take every challenge as it comes.”

With his partner in Blitz Vega, Andy Rourke of The Smiths, Kav (himself formerly of Happy Mondays) has just released the new track – their first in over two years – which is punctuated by a familiar tone by a special guest: one-time Smiths’ bandmate Johnny Marr and his instantly recognizable chiming guitar. Blending classic Manchester indie and baggy-style beats with Kav’s own soulful vocals, the song marks a brand new start for the band whose stratospheric rise included a celeb-filled sold out Los Angeles show and critically-hailed singles which were truncated by the pandemic’s shutdown.

“Everyone is dealing with their own challenges, especially now,” says Kav. “People have to look out for each other a lot more at the moment. We all seem to be fighting to survive, but it’s not too late. There are lots of good people on this planet who want to do something positive, big or small, it’s just hard to notice them sometimes with all the noise. But now’s the time to make some kind of difference if you can.”

Originally written by Kav and Andy for a campaign against discrimination in football, a theme which he could easily explore by drawing upon his own experiences, ‘Strong Forever’ evolved into a broader message of support that can apply to so many different situations; its song title and chorus – a rallying cry for inner strength in the midst of outside adversity. The song premiered on Rolling Stone yesterday.

Co-produced and mixed by Z-Trip (Kasabian, Public Enemy, LL Cool J), the song sees Andy Rourke and Johnny Marr recording together for the first time in 35 years. While the two have played together live several times over the years, including just two months ago in September Andy stepped on stage during Johnny’s show with The Killers at Madison Square Garden, performing ‘There Is A Light That Never Goes Out’ and ‘How Soon Is Now?’, a studio recording has never surfaced… until now.

Andy explains: “We approached a few people to guest on the track and  I asked Johnny, who very kindly recorded some guitars and sent them over. Johnny and I have remained friends, we’ve known each other since we were 13 years old. He’s my oldest and dearest friend and I feel our friendship gets stronger as time passes.”

Blitz Vega were formed in Los Angeles on Christmas Day 2017. In addition to his work with Happy Mondays, Blaggers has also collaborated with the late Rick Genest better known as Zombie Boy, Howard Marks(Mr Nice), and founded the Get Loaded music events and festival brand. The duo have released three singles to date – ‘Lost & Found’, ‘Hey Christo’, and ‘LA Vampire’– resulting in positive comparisons to the likes of Black Rebel Motorcycle Club and Primal Scream, plus coverage from the likes of Brooklyn Vegan, Consequence, Classic Pop, and American Songwriter.