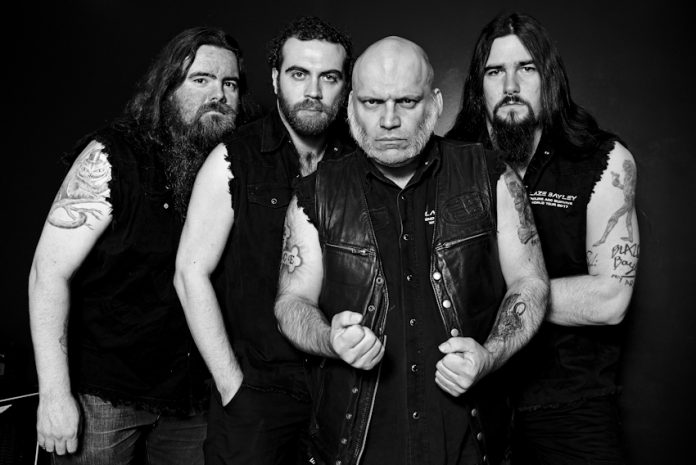 There are three pre-order packages – ‘Regular’, ‘Membership’ and ‘Ultimate Membership’, the latter sold-out within the first few hours, whilst the others remain available via www.blazebayley.net. The packages offer fans a mouth-watering mix of merch items and also special online features, as well as exclusive DVD bonus content.

The new album, called ‘The Redemption of William Black’, is the highly-anticipated third  part of the trilogy, bringing the sci-fi concept to a conclusion.

This will be the tenth album of Blaze’s solo career, following his rise to global fame as singer with Iron Maiden (1994-1999). He was chosen for the Maiden role after coming to notice with his first band Wolfsbane, based around home-city Birmingham, England, which is now the location for the recording of all his more recent solo releases.

The past 3-4 years has been an exciting period in Blaze’s career, with a real sense of purpose, increased sales and media attention, not least with the recent front cover of Powerplay magazine (November 2017 issue), together with a 3 page tour report from North America. Blaze received further recognition when voted by fans as the 67th best singer of all time in Sweden Rock magazine, whilst a guest performance with Disturbed at the UK’s premiere music festival Download was another highlight.

‘The Redemption of William Black’ has been co-written with Chris Appleton of fellow British metal band Absolva. Chris, who also co-produces the album, is lead guitarist and backing vocalist in Blaze’s band for recording and touring, together with his Absolva band mates Martin McNee (drums) and Karl Schramm (bass and backing vocals).

‘The Redemption of William Black’ World Tour begins at the end of February in Glasgow and the European leg completes on 25th and 26th May when a live DVD and CD will be recorded over 2 nights at Chez Paulette, near Nancy, France. After a small number of festival shows in the Summer, plus a short second run of UK shows to be confirmed, the tour heads to USA and Canada in September, on the back of the success of the North America Tour of 2017. Then, in the first half of 2019 the schedule takes the tour to Latin America and again to the USA to return to those territories not covered in 2018, by which time the live DVD and CD will be ready for release.

Special guests on the UK shows (except Hammerfest) will be Manchester-based hard rockers Faith In Glory, whilst in Europe from 1st April to the completion of the European leg on 26th May, the special guest will be Luke Appleton (Iced Earth / Absolva) with his solo acoustic show.

The tour schedule is detailed below….