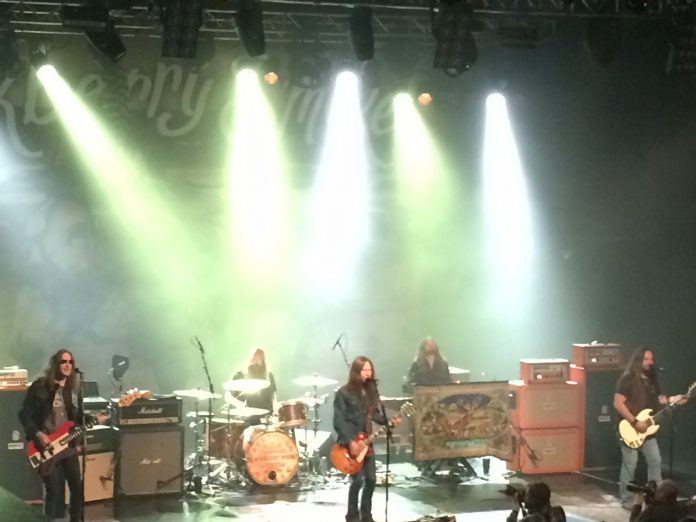 Birmingham boogies on down to the redneck backbeat

The Record Company singer Chris Vos is pretty open about why he called his band such a thing: “we come from LA, and sounding like we do, we thought we’d never get signed,” he jokes. “So we cut out the middle man.” The last laugh belongs to the three piece, though and they now have a deal and a major label debut is due early next year. Well deserved too, on this evidence. This is raw, bluesy and authentic. And with slide guitar chops being displayed on a track dedicated to Johnny Winter, it’s clearly a labour of love for the trio as well. Very obviously able to work a crowd as and when he chooses, Vos carries Birmingham along, and only the most hard hearted is not converted by the closing “Don’t Let Me Get Lonely”. Expect big things and lots of column inches next year.

Staying with the support band, during TRC’s set, Chris Vos hit the nail rather squarely on the head, telling the audience: “people say rock n roll is dead. They ain’t seen Blackberry Smoke.” And being honest, you could end this review there with no further discussion required. Even attempting to flesh out that thought is a little tricky. Because explaining why Blackberry Smoke are so good is like trying to tell someone why you like music in the first place.

Basically it’s like this. Rock n roll’s hardest working – and longest serving – overnight success are launching their third major uk tour in 18 months tonight, and are able to do so because they’ve very handily captured everything that has ever been good about pure, honest, rock n roll.

There used to be tedious debates about whether they were too country to be rock, or too rock to be country. While idiots were stroking their beards and arguing, the five piece (who look like they were born to live on a tourbus) were casually distilling the best bits of everything from Georgia Satellites and Lynyrd Skynyrd to Credence Clearwater Revival and Steve Earle and calling it “The Whippoorwill”. Oh and by the way, as if to prove that wasn’t a fluke, they were at it again this year and out came “Holding All The Roses.”

The close on two hours they are onstage tonight is heavy on the last two records. “Six Ways From Sunday” kicks things off, and the suspicion that this might actually be the greatest of all modern rock n roll bands isn’t far away throughout.

There’s a kind of chemistry of quality in all that they do. “Let Me Help You (Find The Door)” – the lead track from “….Roses” – is a instant classic, with that timeless quality that this type of music possesses at its best. “Rock And Roll Again” is an easy paced belter of a thing, and “Shakin’ Hands With The Holy Ghost” has got one of those choruses that most of us can’t write.

Odd then, that Blackberry Smoke are magnificent because they are normal guys, who had talent and are finally getting their just rewards. Denim and beards are all they need, and there is absolutely nothing gimmicky about them – aside from the fact they can write magnificent songs and deliver them magnificently.

Singer/guitarist Charlie Starr anchors the whole thing as if he’s done it every night of his life, and his skill allows work like “Lay It All On Me” and the brilliant “Paybacks A Bitch” to breathe and flourish.

You’d imagine it was gratifying for the band to be finally be getting recognition for their older songs, they began in 2004 after all, and when they dip back into their past for the laid back “Restless” and the showstopping “Up In Smoke” it showcases a band that was always this good.

One that can surprise too, because after the tumultuous “Leave A Scar” has raced over the horizon to end the set, there’s an encore which includes Sabbath’s “Fairies Wear Boots” like you’ve never heard it before, like Birmingham grit crossed with Cajun flavouring, it is incredible. And by the time they bring things to a halt with “Ain’t Much Left Of Me” you have to say, so are the band.
If retro really is the new cool, as it seemed a few years ago, then Blackberry Smoke are the kings of hip. More accurately perhaps, is this thought: the South just rose again.

Previous article
Bernie And Matt Are Ready
Next article
Everyone’s A Winner, Baby