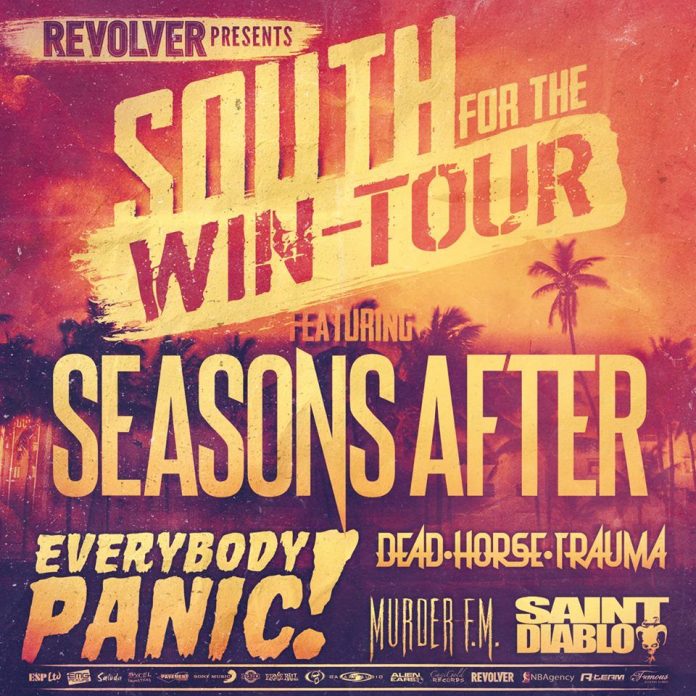 US Tour kicks off tomorrow

Wichita, Kansas rock band Seasons After will headline the South for the Win-Tour presented by Revolver that kicks off on November 5th, in Seattle, Washington at the legendary venue The Crocodile where such acts as Nirvana, Beastie Boys and Pearl Jam have come to cut their teeth. They will then head south ending in Sanford, Florida. The band has been touring nonstop since the release of their sophomore record “CALAMITY SCARS & MEMOIRS” and currently wrapped up the “Brothers In Arms Tour” with Otherwise and Like a Storm. The band will be joined by Oklahoma rockers, EVERYBODY PANIC! and there will be select dates with Murder FM, and also Saint Diablo.

Seasons After released their current full length album ‘Calamity Scars and Memoirs’ in September of 2014 and immediately hit the road in support of the new record. The album was quickly picked up for distribution by Pavement Records Sony/Red. Songs such as ‘Lights Out’ have been featured on NBC SPORTS and their current single ‘Weathered and Worn’ broke into top 40 Rock, Billboard charts and has held its spot now for 8 weeks in the Media base Active Rock Top 40.

When singer Tony Housh was asked about the bands year end tour he said “Wow. It’s been an incredible year. We really had no clue where or what we were in for once we released CSM a year ago. It’s nice to be able to look back at the last year and see our accomplishments. This tour is more than just a tour for us, it’s a celebration.”

MORE DATES BEING ADDED SO KEEP CHECKING BACK!