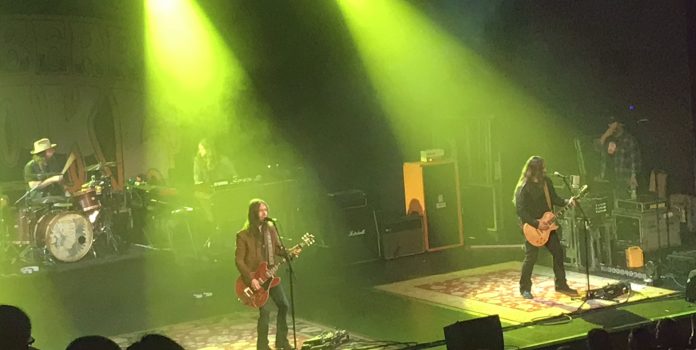 It’s easy to be cynical about the world. With good cause most of the time too. So sometimes its pleasant to forget all that for a while and remember what it was like to be the 16 year old kid who bought an album by Junkyard called “Sixes, Sevens And Nines” in 1991 (if I recall solely because they were signed to Geffen Records) and fell completely in love with a song called “Misery Loves Company” that was on it. A more innocent time, maybe, because I didn’t know what it was, I just knew I loved it. And, know what? They played it tonight, second song, and I still knew every word. These days, of course, I know that this all comes from AC/DC and the likes – and what’s more I couldn’t care less. “Back On The Streets”, “Blooze” and “Faded” are still mighty slabs of hard rock. David Roach on vocals has a denim waistcoat on with a shed load of patches, and that, actually, is the point here. Unpretentious hard rock, straight from the old school, that’s what that jacket says. And that’s what this band does. Roach and Patrick Muzingo on drums are the only original members (bassist Todd Muscat has been around since 1991, the rest joining at various stages since their reformation in 2000) but songs like the mighty “Hollywood” sound fresher than they’ve a right to after over 30 years. Junkyard, then. A band that should have been huge, but who still sound great even after all this time.

If Junkyard symbolise the “then” if you like, in my musical tastes, then Blackberry Smoke are very much emblematic of the “now”. That is to say that ever since I heard their breakthrough “The Whippoorwill” album, and worked backwards then there have been few bands I have come to love as much in the last few years.

And, listening to them play “Let Me Help You (Find The Door)” tonight to kick off, which they follow up with a glorious “Good One Coming On” and a fun “Wish In One Hand” it’s not hard to see why the band that was an overnight sensation according to the press, but had actually been at this for a decade or more when they made it, are filling venues up and down the land.

They are a brilliant band, with utterly brilliant songs. There is, though, a “but” coming. And that is this: but I’ve seen them play better shows than tonight.

First of all there isn’t the greatest atmosphere in the Academy. For a Saturday it feels subdued.  BS frontman Charlie Starr even remarks on it himself, and secondly he says something else. “There are all kinds of songs,” he muses, “and this is a drug song….” And with that they play a blissed out “Medicate My Mind” and it heralds a few too many jams when what I want them to do is rock, personally.

When they do, they are wonderful. “Shakin’ Hands With The Holy Ghost” is one of the finest rock n roll songs of this decade, and the even better “One Horse Town” is simply one of the great pieces of songwriting – I swear Springsteen has won awards for less – and no doubt there will be those that love the jam type arrangements of “Ain’t Got The Blues” and “Run Away From It All” – and there is no denying the musical ability of these five men, nor the chemistry they have.

“Free On The Wing” – a song which featured Greg Allman and is dedicated to him here – neatly encapsulates the meandering, chilled out feel of the set tonight (and being one of the few bands that changes set every night, they perhaps were just in that mood here) while “Ain’t Much Left Of Me” – arguably their best song- ends with another jam as if to emphasise the point.

You could go and see Blackberry Smoke tomorrow and the vibe would be different. They are such a unique modern band that only maybe Gov’t Mule can match them for mood swings, tonight perhaps wasn’t to my taste as much as it might have been, but Blackberry Smoke remain a magnificent outfit who deserves the success they’re having.